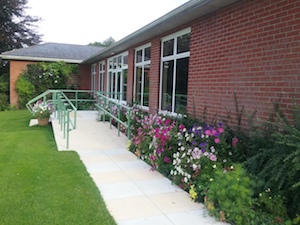 We  meet in a pretty little village, Lockeridge in Wiltshire. Our meetings are varied with expert speakers, speaker workshops and tutored courses. Please visit us – visitors are welcome to “dip-a-toe in the waters” by attending three meetings as a guest, fee £5 per session, before committing to becoming a member.

Browse around our website and get a flavour of the group. By clicking on the buttons below, you can easily find out more information about our branch and activities.

You can see pictures and information about our meetings on Our Blog.  If you wish to ask questions, go to our Contact Us page and fill in a contact form and we will come back to you as soon as we can.

The first full meeting of the Branch was held on 2 February 1976 at the Marlborough Library with twenty-four members including Margaret Gardiner who is still an active member and Carol Jones who recently moved away from the area.  Ann Rollaston was elected as Treasurer.

Many of the talks and workshops at this time were run locally by members themselves.   With increased membership it became necessary to move to the Scout Hall.  Exhibitions at Avebury took place and, whilst looking for a venue for another exhibition, the link with Amber at Tottenham House began.  Members volunteered to run sessions there for the residents in exchange for the use of their wonderful Orangery for an exhibition.  There followed another Branch exhibition in Devizes Library two years later.  The Branch continued to give support to Amber until unfortunately the residents had to leave Tottenham House.

Although moving to the Bowls Club, the Branch soon outgrew the available space for meetings and was also using Urchfont Manor as a location for workshops.  It then had the opportunity to move its base to Kennet Valley Hall, Lockeridge, which offered both space and accommodation for developing its activities and running workshops.  Being well established in its new venue, the Branch has held further very successful exhibitions including a “Celebrations” exhibition for its 30th Anniversary in 2006 displaying members’ work from the 70s, 80s, 90s.  Another exhibition of members’ work was held at Kennet Valley Hall, Lockeridge in 2010.  See Our Exhibition 2010 page.

In October 2006, our Branch altered its name from Marlborough  E.G. to Marlborough & District Embroiderers’ Guild.  This now accurately reflects the spread of our present membership and will encourage more new members from outside the Marlborough area.

In 2021, the group became independent and changed its name to Textiles and Stitch Around Marlborough, continuing to reflect it’s geographic reach whilst ensuring that all aspects of textile work, including embroidery, were embraced.