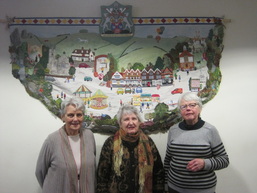 In 1994 the Embroiderers Guild was planning for an exhibition of their work to take place in March 1997.   It was suggested that members of the Guild should combine to produce a piece of embroidery for the exhibition and so a small committee (Carol Jones, Elizabeth Seymour and Judith Winterbottom) was set up to produce a design.  They decided that the piece would be semi-circular and depict various features of Marlborough, including the River Kennet which would form the lower part of the hanging.   Working from photographs, drawings or cuttings, small sections of the design were given to members of the Guild to work in whatever technique they preferred.   Some embroidered buildings and some took on smaller pieces depicting flowers, birds, etc.

By January 1997 the river section had been completed and work began to assemble the rest during the next few months, ready for the exhibition opening on March 12th in Devizes.   The stitching carried on until the very last day and was finally completed with the Marlborough coat-of arms, embroidered by our Chairman, Mary Greening, ready to be hung as the centrepiece of the exhibition.

When the exhibition was over there was much discussion as to what was to do with it. It was hoped that it could be hung in the Town Hall but the Town Council were not interested.   The next idea was to offer to Marlborough Surgery, who happily accepted it to hang in the waiting room and it was officially handed over in May that year.

It remained in the surgery, where it was much admired, but by 2014, 17 years later, it was looking rather tired and bedraggled, and Audrey Peck suggested that it was time for some renovation, so with the Surgery’s agreement this was undertaken by a small group of embroiderers.   Audrey Peck, Rosemary Hawes, Ann Johnson and Margaret White met regularly and occasionally Margaret Gow and Deena Beverley and gradually the renovation took place.   Some new features were added to it, including a number of small figures worked by other members, and a new lining sewn.   Refurbishment was completed by November and rehung in the surgery’s waiting room where it can be enjoyed by a new generation of Marlborough patients. 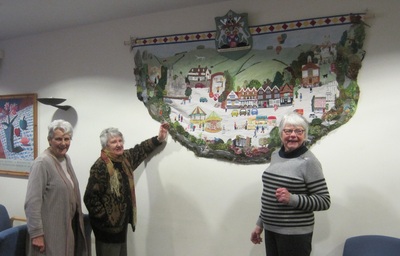 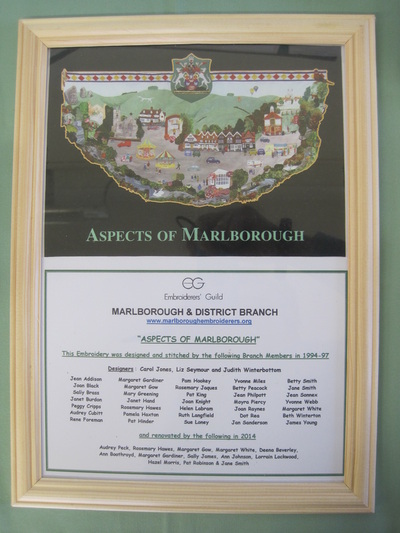 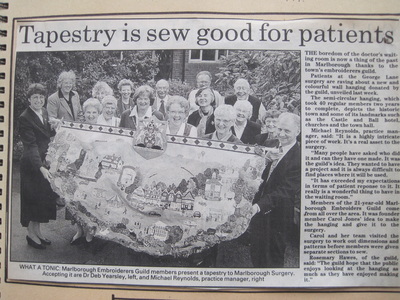 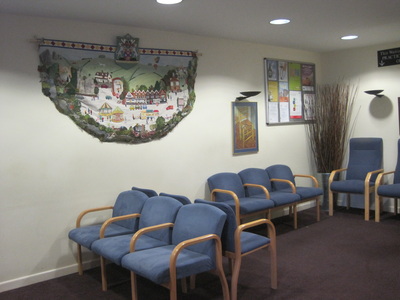 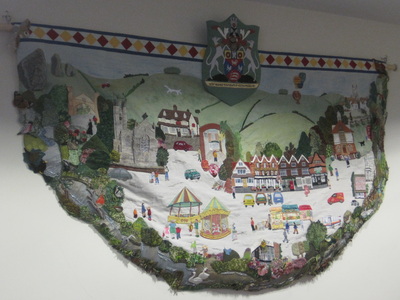