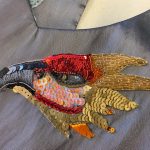 We had a delightful hour listening to Claire explain why and how she takes a Defiant Approach to Hand Embroidery.  Claire explained that her Art teacher at school told her that she ‘didn’t have a creative bone in her body’.  She left school at 16 to join the Royal Air Force during which time she had lots of fun and many life experiences.  She met her husband (also in the RAF) had two children and spent some years in Germany in a ‘normal office job’.  On her return to the UK she worked for a well known children’s charity, eventually running a county- wide organisation in Wales but developed health problems which remained undiagnosed for some time.   During sick leave Claire taught herself to crochet as she found this very therapeutic.

After several unsuccessful attempts to return to work Claire decided that she had to do something else and applied for a place at University to study 3D Contemporary Jewellery.  I hope Claire won’t mind me saying so, but that decision appeared to me to be a real turning point in Claire’s life.  When attending Staffordshire University for interview, Claire noticed some embroideries hanging on the walls of the building she visited.  This prompted a change of mind on her subject of choice to study and she completed a three year degree course on Textile Surface Design making a feature of using alternative materials.  She graduated with a First Class Honours Degree.  During this period Claire was diagnosed with Rheumatoid Arthritis and Fibromyalgia.  This didn’t stop Claire doing what she wanted to do and this is where the name Defiant Embroidery originated.

Claire was the only student to use embroidery for her finals piece, a beautiful Phoenix, made using leather, beading, sequins and metal thread embroidery, the inspiration coming from a visit to the Alhambra in Spain together with the National Ironwork Museum in Oswestry.  At the end of her final year Claire entered the Hand & Lock embroidery competition with her Phoenix embroidery.  Claire hand made the Devore fabric, screen printing her own design, for the dress on which the Phoenix was stitched on the back, with a sequin border around the edge.  She also made use of laser cutting leather for the front of the dress.  Claire told us how she was still stitching on these sequins on her way to London to deliver the dress! 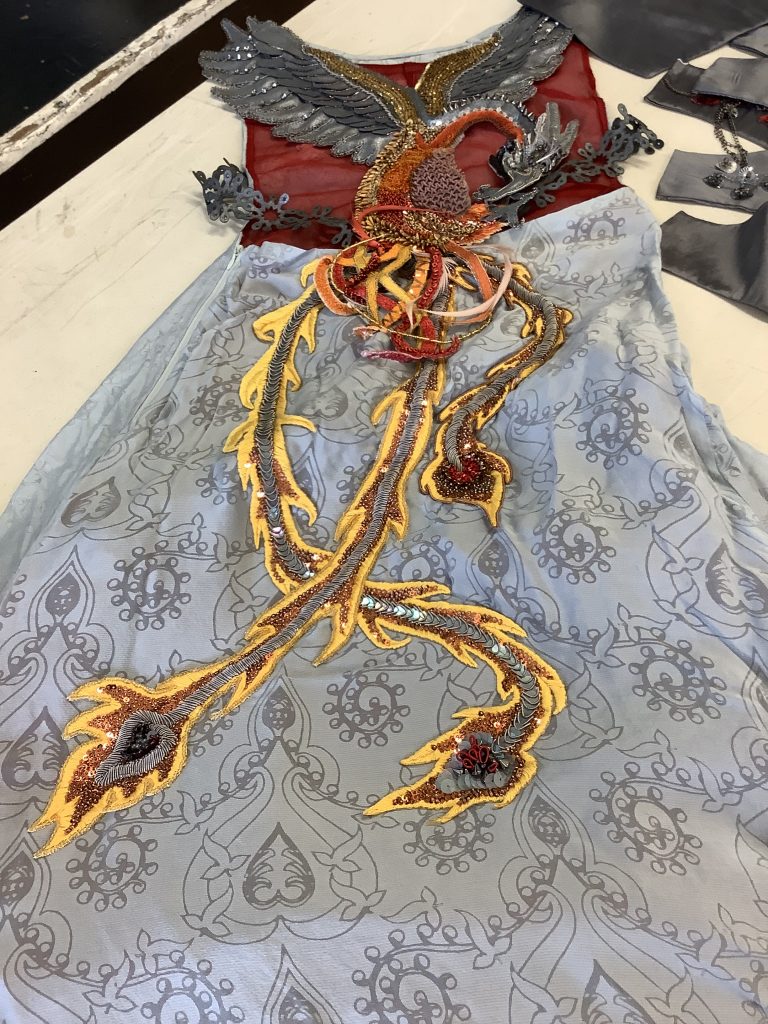 Following the completion of her degree, Claire did some work on commission for the fashion industry but decided this wasn’t for her, so decided to study for an MA.  Staffordshire University allowed Claire to write her own MA programme based on experimental embroidery.  Having learnt to sub aqua dive in Mexico, Claire took her inspiration from the beautiful coral reefs she had seen.  Claire now reproduces these beautiful underwater scenes by means of beading, metal threads and hand embroidery, all in 3D and has also experimented with protecting her work by encasing it in resin – all part of her MA process of experimentation.  Claire has also experimented with tambour work on hard surfaces, for example wood and plastics. 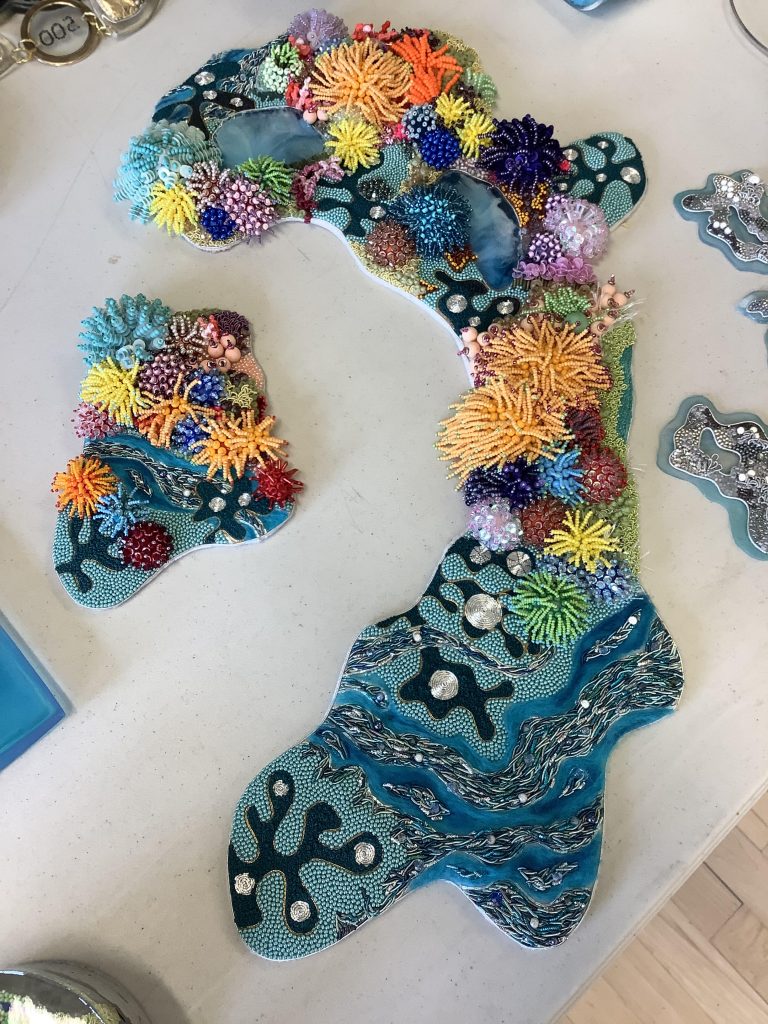 Last year Claire and her husband decided on a different lifestyle – living full time in a very luxurious motor home!  Her ‘studio’ is a large cupboard underneath the motorhome in which she keeps all her boxes of beads, metal threads and other equipment.  Claire also teaches at Staffordshire University and so is able to access the University’s equipment for her resin work.

Claire’s work is truly beautiful and inspiring – she has certainly proved her Art teacher wrong – she is very, very creative and I’m sure will go on, defiantly, to create ever more beautiful and experimental embroideries!

Copyright on photos to Claire Edwards