Skip to content
Home > Main Meetings > Mr & Mrs Bayly from Marlborough – February 2013
In the 1690s Thomas Bayly, a wealthy silk merchant, and his wife lived in Marlborough.  They were a stylish couple who dressed to impress in hand made garments of silk, linen & cotton.

Last Monday at our February meeting we were fortunate enough to meet Mr & Mrs Bayly and to have a close look at their clothes.  Angela Munn from the Merchant’s House in Marlborough, who had lovingly recreated their complete outfits, introduced us to two volunteers who modelled the clothes.

The curtains opened and there were Mr & Mrs Bayly dressed only in their under garments and over the next hour they were helped into their beautiful period costumes.

Mrs Bayly in her under garments

Mrs Bayly started wearing a mop cap, a shift, stays (originally whale bone but plastic for the modern version), knitted stockings held up with ribbons for gaiters and identical shoes.   Angela explained that at this time there were no left or right hand shoes  and people swapped them each day.   She mentioned a gentleman called William Lee who invented a knitting  machine for stockings but he was refused a patent as people were worried  knitters would be out of a job so he moved to France to  continue his work. 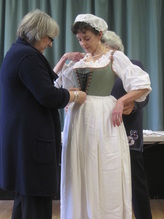 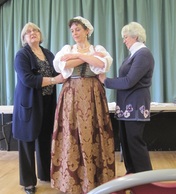 Mrs Bayly having her skirt fitted 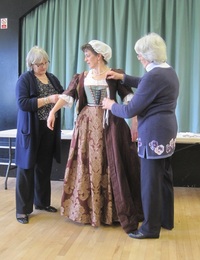 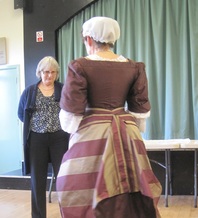 Mrs Bayly in her gown

Finally Angela added a “fontage” in front of Mrs  Bayly’s mop cap which was a small coiffe with lace and ribbons.   It was explained that a French lady, Madame Fontage invented this  headwear after returning late from hunting one day.   Being in a hurry she piled up her hair and added lace and ribbons. The fashion became popular both sides of the Channel.

Mr Bayly in his shirt and breaches

It was then Mr Bayly’s turn.  He first appeared in a long linen shirt with silk lined linen breaches.  Angela had taken the pattern of this shirt from the collection of patterns created by Janet Arnold (Patterns of Fashion).  She explained that it was in the 1660s that men started wearing ensembles  to match, that is to say, breaches, waistcoat & coat.  Angela read several passages from Samuel Pepys’s diaries in which he talks about his own under garments.

Mr Bayly’s full length waistcoat was added and then a truly magnificent full length coat made from a wool fabric with 103 buttons &  buttonholes lovingly made my Angela.

A white neck cloth was then tied in the form of a
cravat.

Finally Mr Bayly put on a magnificent wig and  held a walking stick.  Angela  explained that Louis XIV started the fashion of wearing wigs when he started to  go bald. 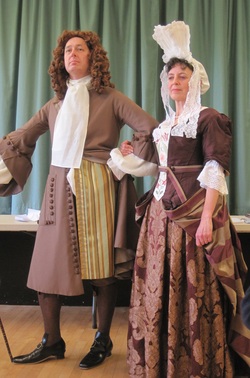 The couple then paraded the length of the hall to show off their fine costumes.