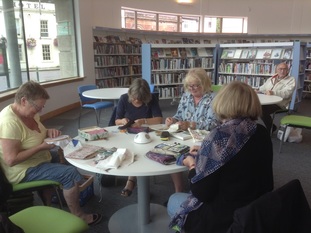 Christine H organised a group of members and they hand stitched in the library at Calne.  With Christine were Chris C, Diana K, Lindsay S and Linda W.
Photo by Christine H

On the morning of Wednesday 3 August, we stitched on the Turkey work for covering the replica 17C chairs at the Historic Merchants House, Marlborough. We were outside in the sunshine on the pavement in front of the house on market day and we had lots of interest from local people and visitors. We gave out information sheets about the historic house and the Embroiderers Guild. 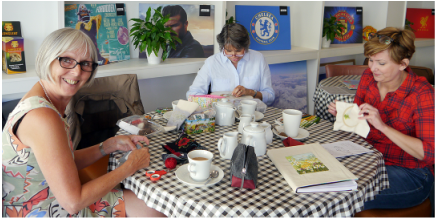 Report and photo by Julie B
Royal Wootten Bassett

On Saturday 13 August, Susan P and I spent a very pleasant couple of hours in the library at Royal Wootton Bassett doing some hand stitching.  We had a small display of some of our work, which attracted the attention of two ladies who sat and chatted with us for about 45 minutes.  They may decide to join us at our next meeting.  A couple of other ladies stopped to chat.  We enjoyed the time we spent there and hope we raised awareness of the Embroiderers Guild a bit!

Report by Ann K Thank you to all members who contributed to this event and for the photos and reports for our blog.
Ros L