Planning of the Savernake Embroidery

​In 2016 Marlborough & District Embroiderers Guild was approached to see if they would be interested in designing and creating a wall hanging for the waiting room area  in Savernake Hospital and Margaret Heath ​who designed the Kennet Valley Embroidery which now hangs in the Kennet Valley Hall in Lockeridge, agreed to take on the project.  Over the summer Margaret came up which some ideas which she showed to the Hospital and in the autumn of 2016 she asked for volunteers to start the embroidery.

​This blog shows the progress of the hanging over the months  The first photos were taken in October 2016. 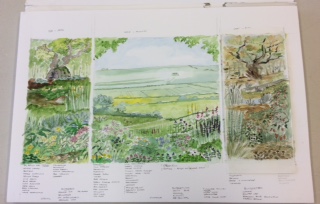 These images show dyeing the fabric