Rosemary and Margaret joined the Guild in 1991 after visiting an exhibition of embroidery together in the Marlborough library.  Mary Greening was Chairman at the time and the subscription was £12.50. They recall enjoyable meetings in the Scouts Hut in Marlborough and workshops in the pleasant surroundings of Urchfornt College.  However, soon after their joining, meetings moved to the Bowls Club, and before long, as numbers grew, transferred to the current location in Lockeridge with better facilities for both meetings and workshops and delightful views. Over the years they have both been involved with the branch’s various workshops and exhibitions, and have worked on several projects including the Marlborough Surgery hanging in 1997 and the Kennet Valley Embroidery which hangs in the hall. The embroidery now used as the reception desk tablecloth was renovated by Margaret and Rosemary from an earlier project made in the 1980s. One particular highlight they both recollect was spending days at Avebury Manor in 2011 helping to complete the embroidered bed hangings. 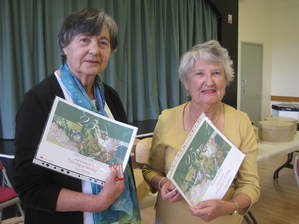 Rosemary has always enjoyed needlework from an early age. Her mother taught her to knit at age three, and a nun at her convent school taught her to sew and make Brussels lace. She now enjoys making quilts and all types of embroidery, and has been involved with the stitching of the Turkey work chairs at the Merchant House from its inception. She has also run an Embroidery Group for the U3A for the past 25 years. ​ 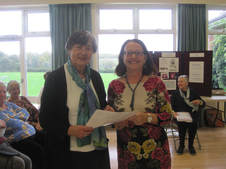 Margaret learnt to sew with her grandmother and still has a handkerchief case embroidered in cross stitch, made in school. She taught herself crewel work and other forms of embroidery, mostly from books of which she now has a large collection; but has also learnt many skills from the various workshops she has attended over the years. She has also spent time on the Turkey work project, and is now happily involved in embroidering flowers for the Guild’s latest project – the Prospect Triptych.
Thank you Margaret & Rosemary for giving us these details.