James Hunting’s talk this month was entitled “Traditional hand stitching in a contemporary way”.   He had a very interesting background and started by telling us about his  time at Goldsmith’s College, graduating in 1986.  His first job was in marketing but he  was then offered a job with an embroiderer. In those days there was no internet or  foreign markets to challenge any business and he started by sewing roses as  piecework.  For the next 25 years,  he worked freelance as a textile embellisher working with names like Jasper  Conran, Jean Galliano and Jenny Lessin. He worked on finished garments in  Paris and never  used a frame, hoop or thimble.  In  2004, he decided he had had enough of the glitz of the fashion world and the  demands put upon him and returned to the UK to obtain teaching qualifications.  He  went on to teach on Fashion and Textile courses in Further  Education. 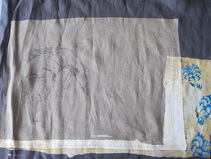 In 2006, he was nominated Embroidery Guild Scholar  of the year.  In the fashion industry he was used to working to deadlines so there was no problem producing a one man exhibition for the Knitting & Stitching Show.   He then went on to take a Masters Degree at Cumbria University  and half way through the year he got what he called “The Job” when he was asked  by the Royal School of Needlework to set up a degree course in Hand  Embroidery.  He worked there for  four and a half years and left last year.

James then went on to talk about his embroidery  which he had brought to show us.   He chooses to use linen (Texere Linen) and silk (Eterna and Mulberry  Silks) and starts by creating a number of backgrounds at once – he can take  several weeks to create the mood he is seeking.  The next stage is to hunt through his  box of figures and trace his chosen design onto his background.   He uses silk organza which he often shreds away once the image has been  transferred. He surprised us by  saying that he never uses a sketch book but has an ideas book instead.  He enjoys the gesture or movement  stitch for the figures, always keeps his thread short and concentrates on a small variety of  stitches.  When it comes to display  James does not mount or frame his work, he hangs it with pins a couple of inches from the wall allowing it to move. 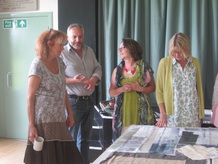 James uses his embroidery to express emotions,  does not duplicate or name his work allowing the viewer to interpret it themselves.  He wants people to say “that reminds me of  . . . . . .  “

James was an amazingly relaxed speaker and this was reflected in his work and his love of fabrics and embroidery. 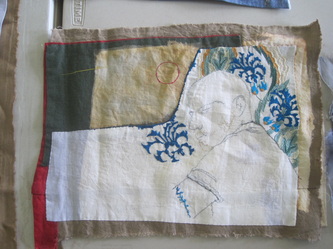 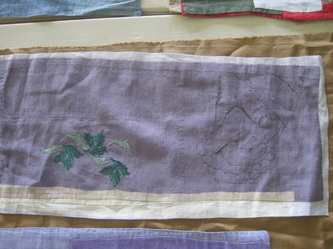 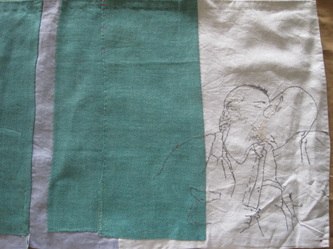 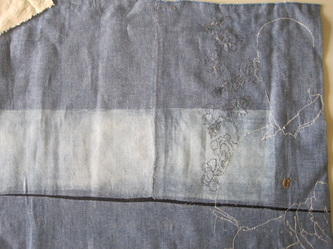 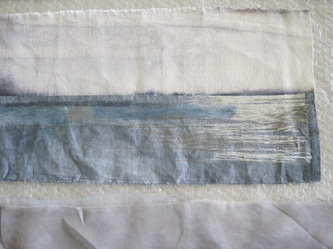 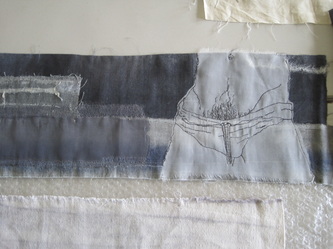