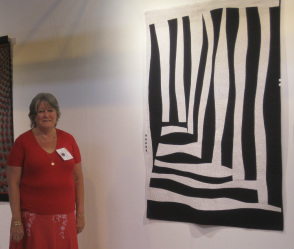 On Monday we held our AGM with several Committee Members retiring and new ones taking over.  After the formal meeting we enjoyed a  talk by Christine Seager, one of our regular members and the person who has kindly created our Marlborough & District Embroidery Guild website.

It is always interesting to hear how people became interested in embroidery and this was no exception. Living in South Africa Christine’s mother made all her clothes and when she attended a convent in Northern Rhodesia (now Zambia) the strict nuns taught the children to make a sewing bag at the age of 5 and a horse at the age of 6. Both these  treasures were passed round. 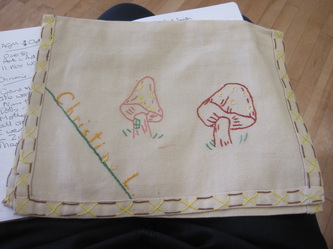 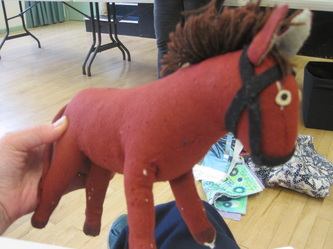 Christine obviously learnt a lot and at an early age she went into business making dolls clothes for friends using her mother’s  sewing machine.   By the age of 11 she was making her own clothes and struck a wonderful  bargain with her father  who promised to buy her new material once she had completed an outfit. She then went to boarding school but  unfortunately was not allowed to use a sewing machine so she lost interest  and  it was not until she got married and her husband bought her a machine  that it  returned. 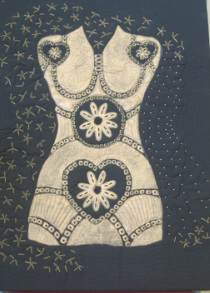 She lived abroad for a number of years and when  she returned she joined the Maidenhead Embroidery Guild, attended various  workshops and followed a City & Guilds course with Siân Martin.   She did not enjoy the structure of this qualification but successfully  went on to complete the Open College of Arts Textile 1 and 2 courses. 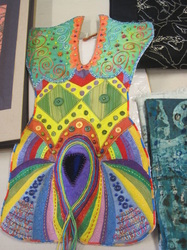 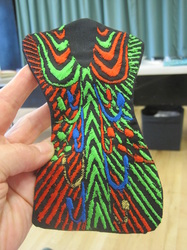 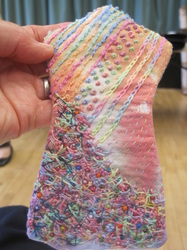 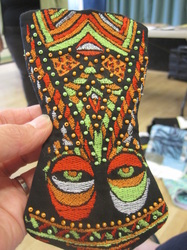 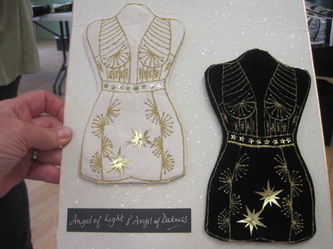 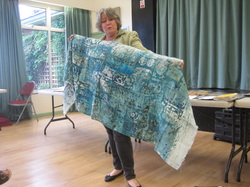 Christine then discovered Committed to Cloth and  did a one year course learning to dye fabrics.  She made us laugh by saying it was wonderful having the opportunity of learning, experimenting and making a mess  in someone else’s workshop.
When Christine moved to Devizes she discovered Urchfont Manor  and, because she was keen to make a corset, she enrolled on the Historic Heirloom course tutored by Janet Crowther. 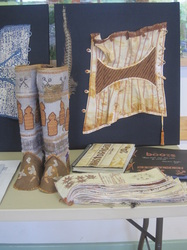 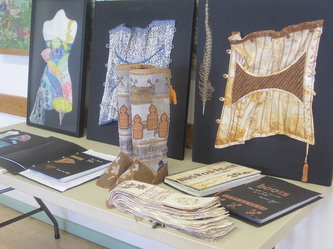 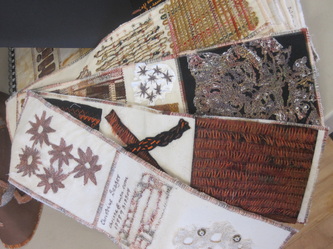 At this time she went to a talk given by Marie Roper through  Laura Kemshall.  Christine liked  the technique and started quilting.  Researching more she found Nancy Crow’s website in the States but soon  realised that the cost of two back to back courses, the cost of the flight and accommodation was going to be prohibitive.  Christine has now embarked on a project  following Nancy’s principles and has now completed 4  black and white quilts and has just progressed to adding a colour – red. 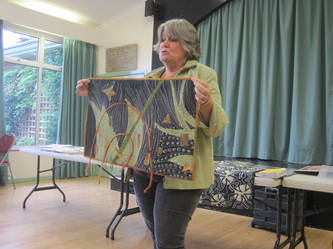 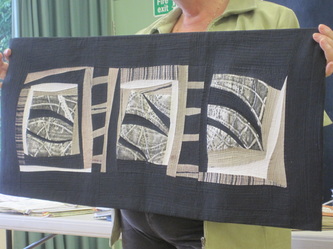 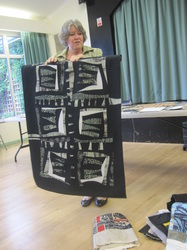 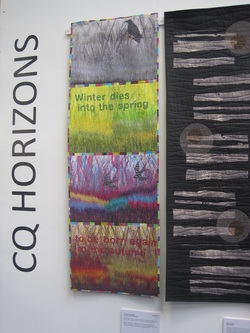 In August this year Christine had two quilts displayed at the Festival of Quilts, one on the Contemporary Quilt stand  and the second was chosen to be included in the Fine Art Quilt Masters. (See more details on the August Blog write up).   With success like this I think we can safely say that Christine has now  found her voice in life.

Before concluding Christine answered various questions about her techniques and emphasised how important she  has found it to stick to the design principle of the rule of thirds.

The next Guild  meeting will be on Monday 4 November at 14.00 hours when the speaker will be  Helen Mortimer and her talk will be entitled “ Silk Routes – A Personal  Journey”.  Doors open at 13.30 hours.