Skip to content
Home > 2016 > September
Our branch was invited to take part in the annual Avebury Day on Saturday 10 September.  This was a great opportunity to show our work and to promote the Guild.  The wonderful hanging which our Young Embroiderers created for our exhibition earlier this year was on display and, as you will see from the photos below, children were encouraged to stitch into a sampler. 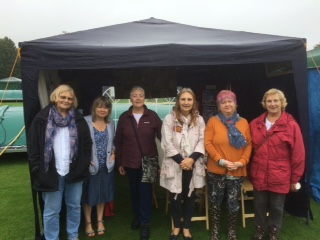 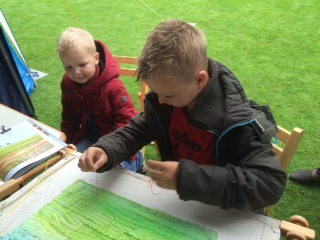 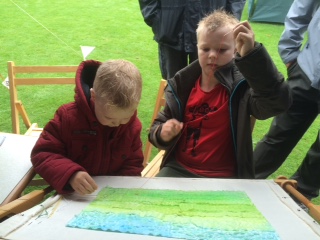 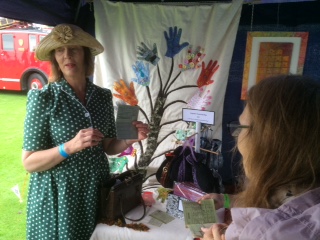 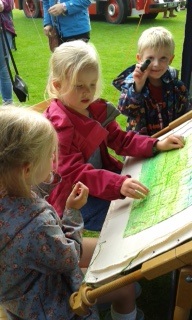 There were a great variety of exhibitors – to the left and right we had a vintage fire engine and ferret racing! 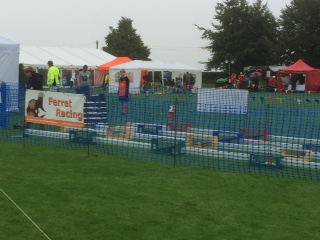 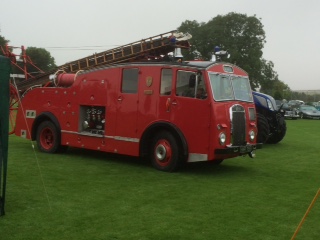 Thank you Vernice and Lindsay for the photos.  Ros 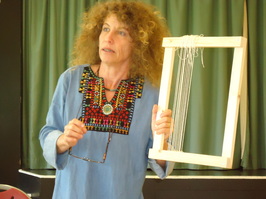 Following a wonderfully stimulating talk on the previous day, Isabelle Jourdan led a one day workshop entitled ‘Wild Woman Weaving’ to a group of would-be needle weavers. As it turned out the title was not a misnomer!

Isabelle with her voluminous hair, bare feet, frantic hand gestures, dynamic personality and superabundant enthusiasm was truly ‘wild’ about her craft. Moreover by the end of the day our group of sedate and temperate stitchers had all become infected with her enthusiasm and were champing at the bit to invest some of their own personalities and creativity into their samples. 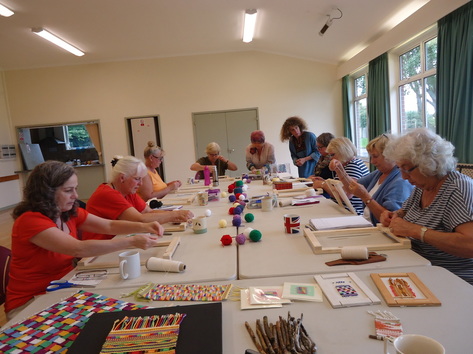 The day started with Isabelle showing the group how to attach the warp threads to the frame. This was more time consuming than at first appeared as each pair of threads had to be attached individually. She then demonstrated the basic needle weaving technique using a single background colour. Once the group had mastered this she provided instructions for six variations of the basic weave, using just one other colour of thread, which amazingly, resulted in the creation of some beautiful and potentially intricate patterns. At the end of the day Isabelle explained how to remove the sample from the frame, and gave suggestions about adding decorative finishes such as fringes, tassels, beads and feathers. The completed sample could then be hung on a twig or small branch to give it a rustic feel. 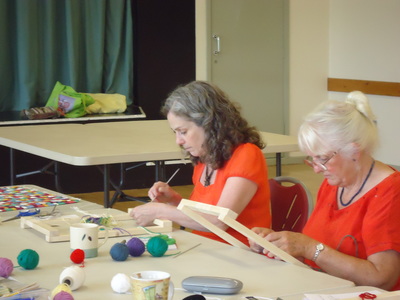 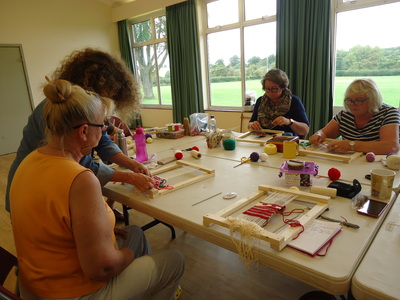 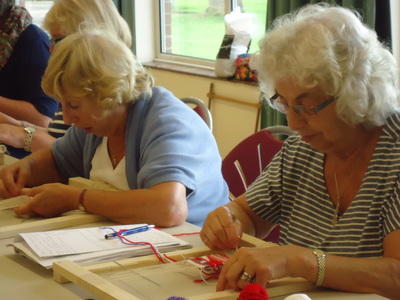 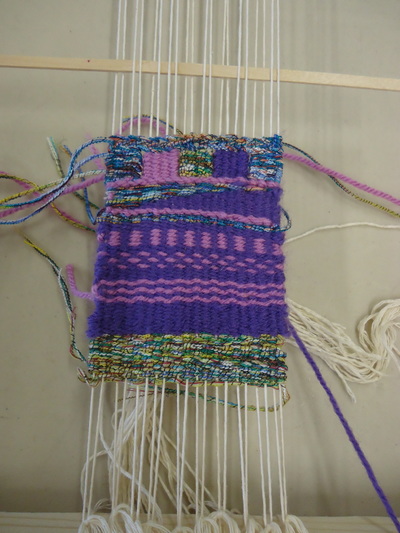 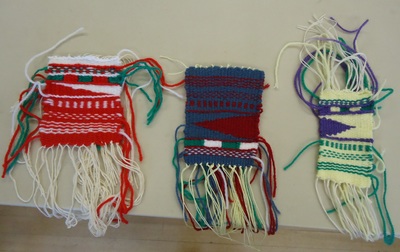 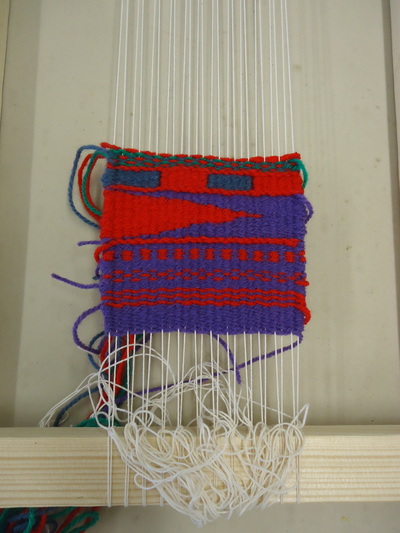 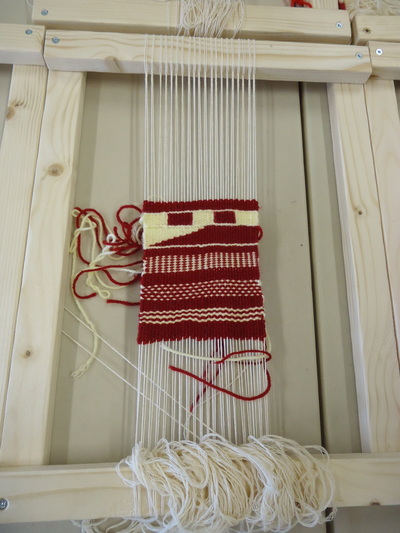 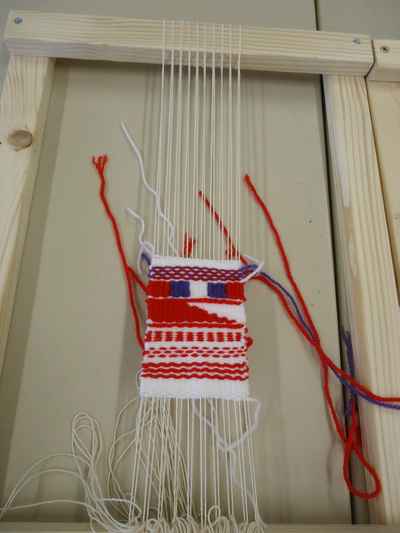 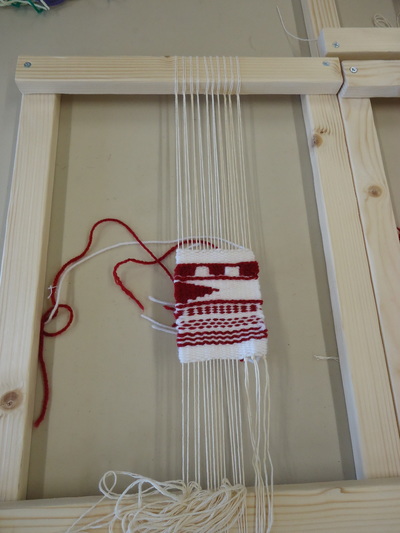 Although three members of the group were able to remove their samples from the frame, unfortunately there was insufficient time to complete the hangings. However, everyone had developed sufficient skills and knowledge to be able to complete these at home. More importantly, everyone had been inspired by Isabelle to unleash some of their latent creativity through the absorbing medium of needle weaving. 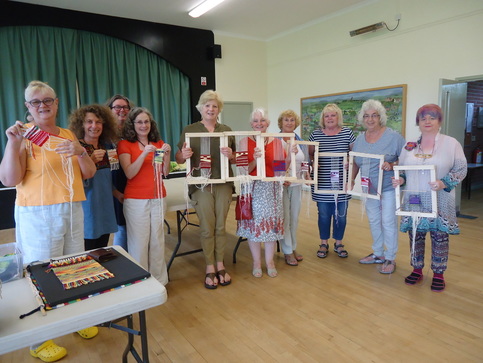 A great day was had by all! Report and photos by Maria F
Thanks, Maria!  Ros L

After our summer break we welcomed Isabelle Jourdan to speak about her great interest in spinning and weaving.

It started when she and her husband were running an olive farm on the Greek island of Lesbos and she visited a shop exhibiting local weaving.  Each Saturday for the next six months Isabelle attended a workshop and became totally enthralled with the craft.  A lot of her inspiration has come from Kirsten Glasbrook who has written several books on tapestry weaving. 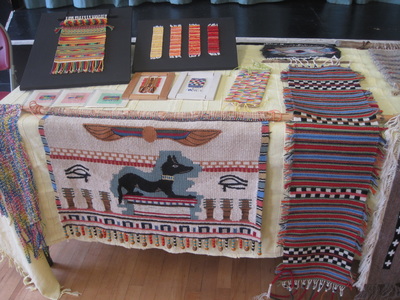 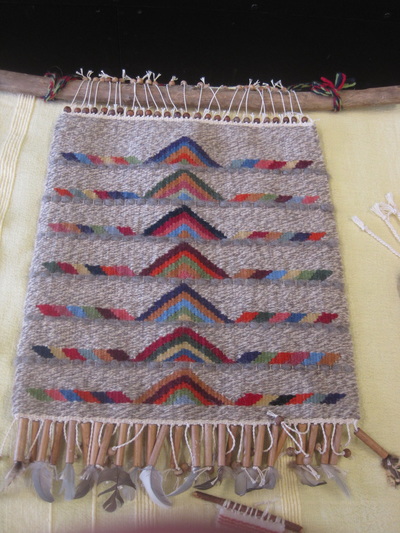 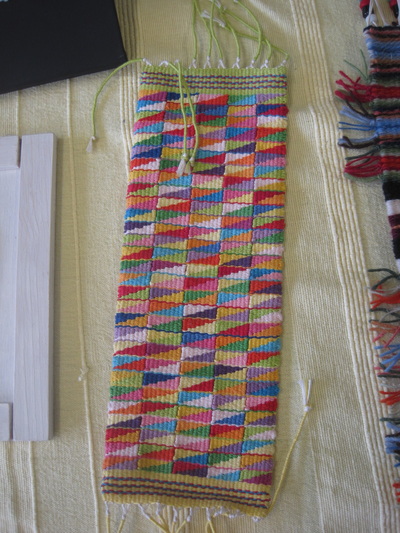 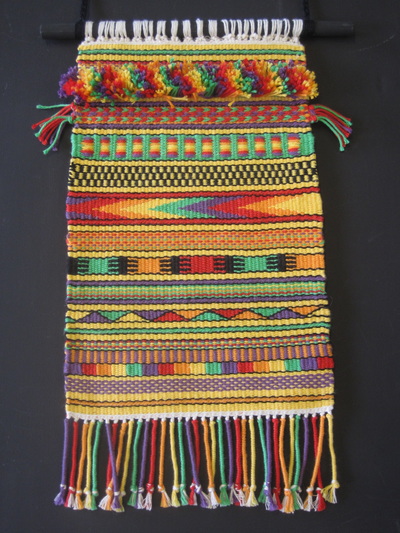 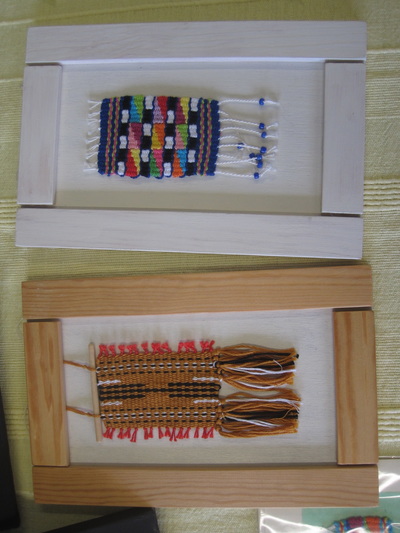 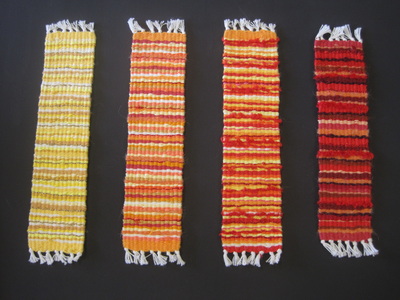 Isabelle does not believe in conventional weaving methods but follows the simple approach using a basic wooden frame and not a loom – an old picture frame, an old window or door frames for large pieces.  An embroidery needles to weave rather than a shuttle and she uses a knitting needle to knock the weft rather than the recognised tools.  Isabelle used the expression “wild weaving” and in some of her work she does not start at the usual place, her weft threads do not necessarily go the width of the work and are often curved.  Finishing adds an interesting dimension and she hangs her work on driftwood and uses a variety of wrapped tassels, beads and even feathers. 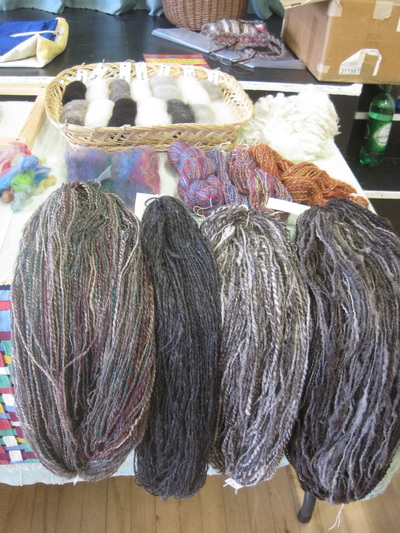 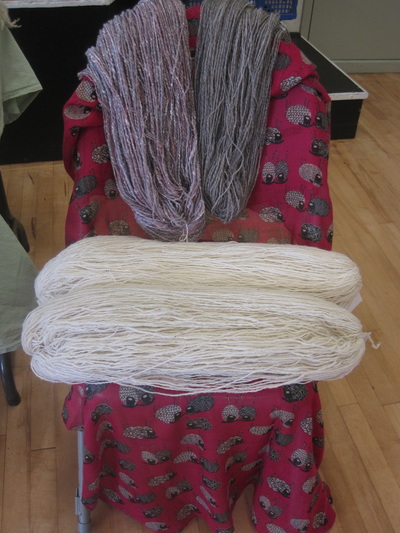 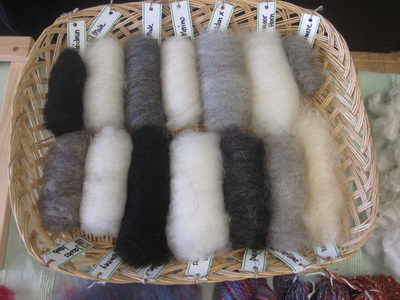 As a result of her introduction to weaving the next step was to create her own yarns and Isabelle passed round a basket of raw wools and finished yarns from a variety of animals – merino, alpaca, Jacob, Jacob cross and goat.   She does not sell her work, she teaches her techniques to encourage people to use their own ideas, colours and wools to make hangings, cards, brooches and bookmarks. Tomorrow, Isabelle will be leading a workshop entitled “Frame tapestry weaving for beginners” so we look forward to hearing about it and to seeing members’ samples. 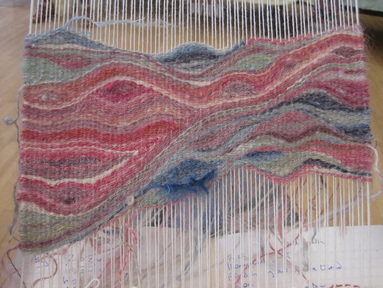