Skip to content
Home > 2013 > March
Last week a group of us visited the NEC in Birmingham.  Our ticket covered three different exhibitions, Sewing for Pleasure, Fashion, Embroidery & Stitch and Hobby Crafts.  In addition to the retail therapy we enjoyed seeing our Macedonia Olympic postcards on display. 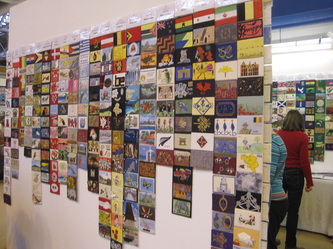 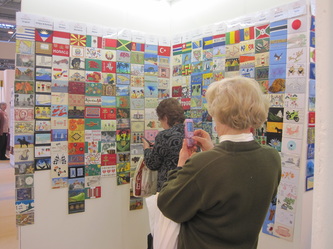 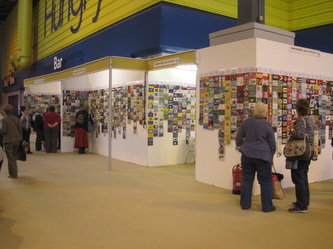 Brenda Hickinbottom also had her work on display.  As well as being a member of the Marlborough & District Embroidery Guild, Brenda also belongs to Meniscus Textile Artists, which are based in Rothley  Leicestershire.   The subject for their stand was “Iconic Women” and Brenda chose the ATA Spitfire pilots in the Second World War for her work.

She tells me, her preparation included looking at photos of scenery and sky formations together with a lot of thinking time.  She then drew a rough sketch of outlines for the overall size.

Using  silk organza layers, trapping silk fibres and paper she free machine embroidered to  create the shapes and  textures.  Letting the machine needle and threads draw  the  design in her head as you would a pencil when drawing.

In addition to the individual projects each member of the group made an apron with a single word on it and when displayed it read:  “These aprons represent the traditional image of women but women are about more than this”. 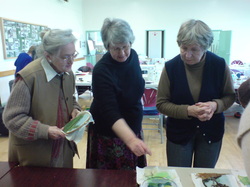 Margaret’s preparation for this workshop was excellent  and this helped us with our choice of landscape at the start of the day. Each  person received a different photo of a landscape and scraps of voile in  relevant colours. By looking through a small window of card we chose an area of  the photo to use as an inspiration for our work and this made it far less  intimidating than trying to capture a large area. 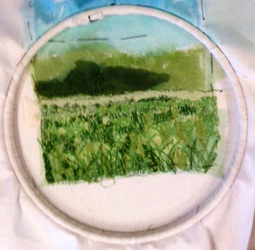 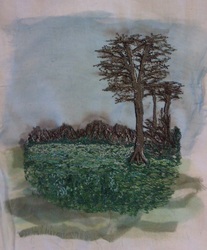 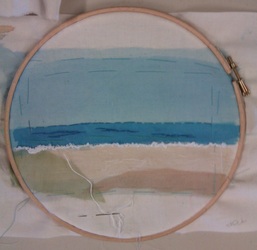 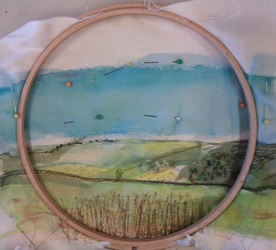 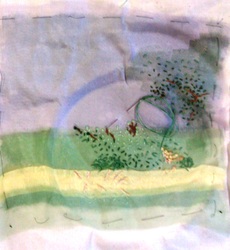 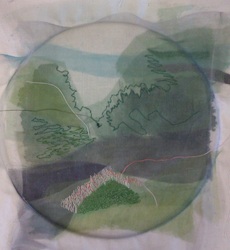 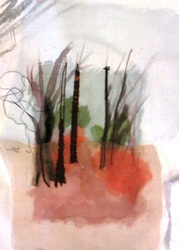 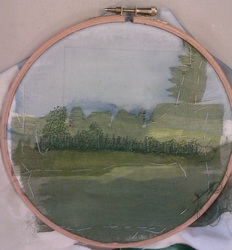 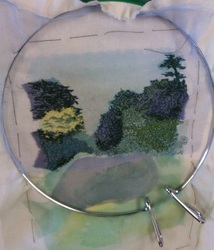 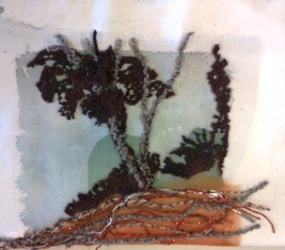 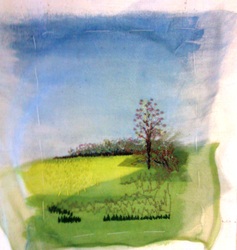 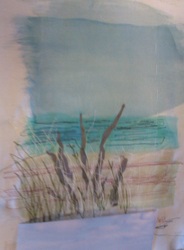 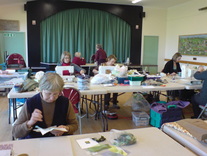 Using a background of calico, we painted areas of colour  with well diluted fabric paints. Special emphasis was given to the sky as this  would remain free from embroidery. We layered our pieces of voile as an  indication of trees, fields, sea etc. These were secured using Bondaweb or a  bonding powder. Larger pieces of voile on top helped keep smaller bits  underneath in place and also created a “mood” to the picture.

Now came the fun part of creating our own work of art  with embroidery, either by hand or machine and by doing so we added details of  trees, bushes, fields etc. Margaret was always there to give advice but  encouraged us to make our own choices so that the finished piece would be our  own creation.

The day went so quickly and we each came away with the  beginnings of a textile masterpiece and a good basis for any future landscape  work. Some machinists had finished but those of us doing hand work vowed to  finish at home.

We are very fortunate to have members like Margaret who,  as well as being talented, are able to give us excellent and enjoyable tuition.

Thank you for a lovely day.

Kay and Michael Dennis who specialise in stumpwork talked to the Guild this month.   Kay explained that stumpwork is a mixture of embroidery worked on the surface, padded work and some free standing.

Kay and Michael have written three books on stumpwork and  Kay explained how she first got interested.  When she was only 4 years old she was  sent to visit her aunt while her parents moved house and those few days had a  major effect on her life when she was introduced to embroidery.

When she got older she went to a class on needle lace and after attending a talk by Barbara & Roy Hirst she was enthralled by their work and became “one of their groupies”.

Michael retired 18 years ago and became a professional wood turner. Dust problems forced him to alter his work and he started making boxwood frames for  Kay’s students.  He then took up  needle lace himself and became increasingly more involved in her work and is now the chairman of the Guild of Needle Laces. 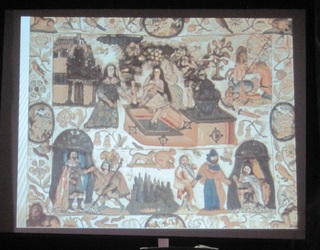 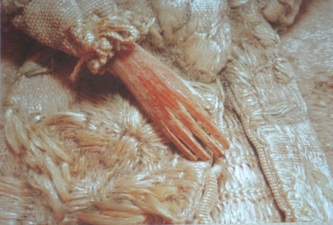 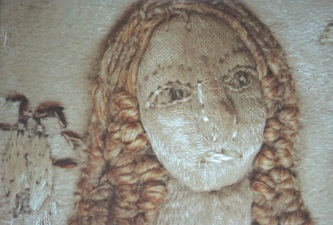 Following on from their introduction, Kay went on  to explain how young teenagers in the 17th century would make a sampler of stumpwork  as a dowry piece.  She explained  how kits for these samplers were sold in large towns like Canterbury, York &  London so often  the resulting pictures were similar.  The faces and hands in this example above were made of  wood and the face was covered with glue and threads were worked over to cover it. 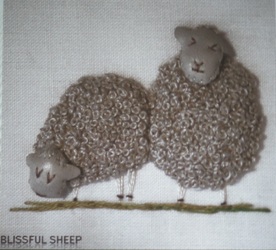 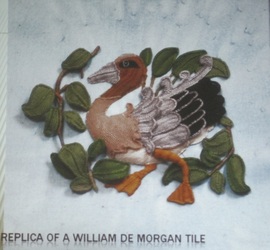 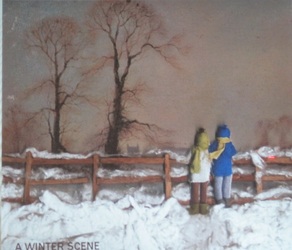 Kay then showed us examples of her work and these sheep were created with calico covered with loose French knots and leather for the faces.

This middle piece was a challenge inspired by a William de Morgan tile found in a toilet and was 60 pieces produced separately and then assembled.

As a couple they were always keen to come up with new ideas and for this Winter Scene piece on the right Michael took a photograph, printed it on Tshirt printing paper and ironed it on the material.   The fence was made from balsa wood and Kay mounted the children on Vilene  then stuck them to the balsa wood.   Carded cotton was used for the snow. 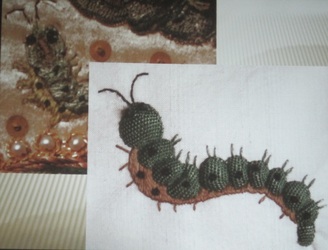 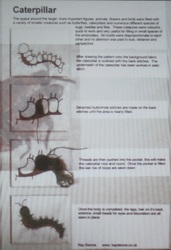 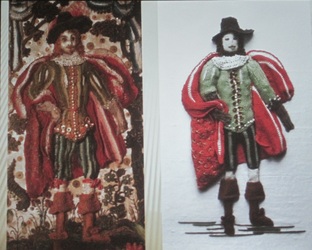 In 2009 Kay was asked by the National Trust at  Lytes Carey Manor House in Somerton to  reproduce some images from two of their mirrors.  She also wrote storyboards to  accompany her work to show visitors how they were created.

Stumpwork for the Guild folio

Finally Kay explained that she was asked by the  Embroidery Guild to produce stumpwork samples for their portfolio collection of work which can be borrowed as a teaching aid.


The next meeting of the Guild is a Ploughman’s  lunch followed by demonstrations on Monday 8 April so please book your place if  you have not already done so!