Skip to content
Home > 2017 > August
On Tuesday we spent a truly memorable day visiting the Royal School of Needlework at Hampton Court Palace.  I was not surprised to learn cameras were not allowed so I am afraid below you only have a few photos taken outside.
​
We congregated outside the main entrance and each person was issued with their own named identity tag.   We were greeted by two delightful ladies from the School who guided us along dark corridors and up narrow stairs deep in the bowels of the Palace.  On entering we passed through a room with embroidery books from floor to ceiling and into one of their studio rooms which had a truly fantastic view over the gardens.   The first hour of our visit was a presentation given by Dr Susan Kay-Williams who has been the Chief Executive for the past ten years.  ​ 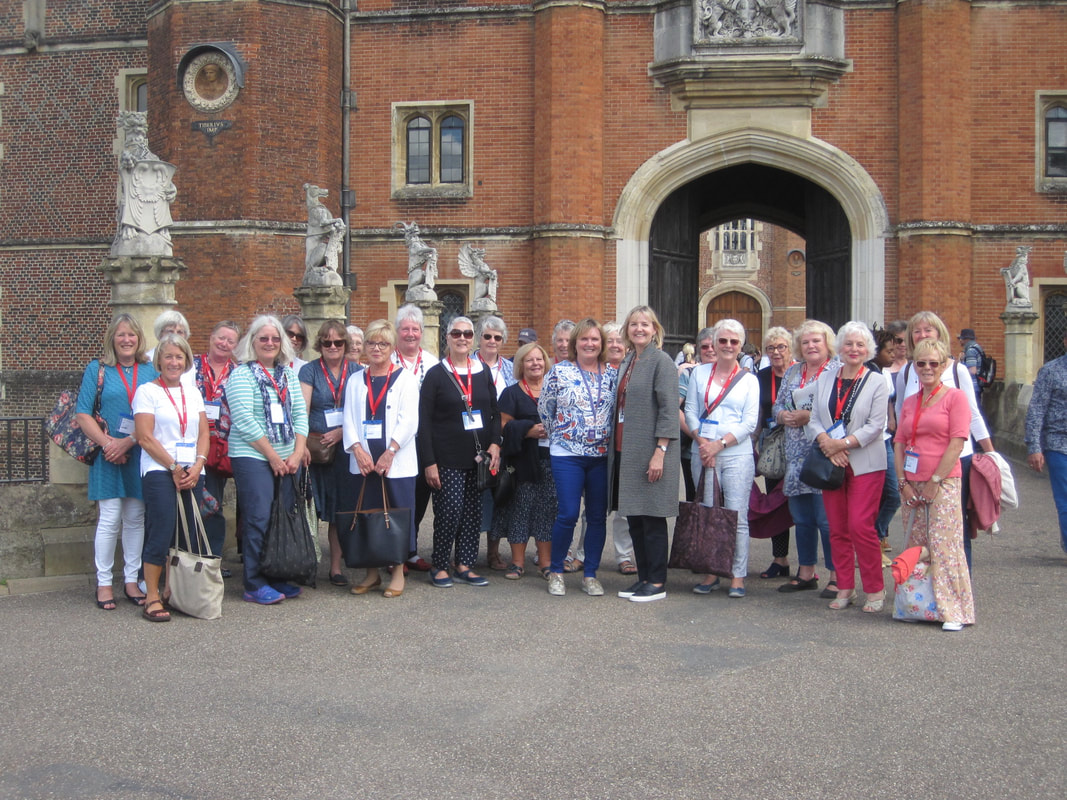 Dr Kay-Williams started her talk by explaining that the Royal School of Needlework was founded in 1872 by Lady Victoria Welby to encourage the learning of hand embroidery techniques (which were starting to disappear) and to establish embroidery so it would be seen along-side fine arts.  It was an occupation for the educated woman who perhaps had found herself on hard times and needed to support herself and Princess Helena, Queen Victoria’s 3rd daughter became a fund raiser for the School.

Originally the Royal School of Needlework was located in Kensington but 30 years ago, thanks to the Queen Mother, they moved to Hampton Court Palace.   Today they have a variety of courses on offer: the Certificate and Diploma courses which include Black work, Silk Shading and Gold work, degree courses and the Future Tutors’ course.  In addition they undertake bespoke work, ecclesiastical assignments, christening robes, veils and of course the Duchess of Cambridge’s wedding dress.  Many people will have seen the Game of Thrones embroidery which has been exhibited at the NEC and Alexander Palace.

Dr Kay-Williams then went on to talk about various items from their collection and explained that everything had been donated.  She showed us a beautiful 17thC purse with stitched flowers at the back and front on a metal background and several banners.  In 2009 they received a legacy from Jean Panter and this turned out to be 300 boxes of embroidery and 27 sewing machines.  The Royal School of Needlework have published their own books on embroidery techniques and we were shown work by Roy and Barbara Hirst who had written instructions for making stumpwork hands and faces.
​
In 2011 three pieces of 17thC embroidery were auctioned by the Royal School of Needlework and we were shown an image of a mirror surround showing Charles II and his wife Catherine Braganza, a decorative tray and a stumpwork panel on silk.  I need to explore further, but I am almost certain the decorative tray was bought by the Holbourne Museum in Bath.  On their website they call it a basket but it looks amazingly similar to the image we were shown and anyway, I doubt there are many Charles II pieces of stumpwork about!!!

The second part of our visit to the Royal School of Needlework was a tour of their studios where we were shown examples of work in progress (mainly ecclesiastical) and past students work.  We saw the design drawing for the Overlord Embroidery and an amazing floor to ceiling example of Japanese gold work.  Topics for student embroidery included Toad of Toad Hall, Barbar the elephant, the Princess and the Pea, Freddie Mercury, Johnny Depp  and various animals and birds.

As a memento of the day many of the members treated themselves to books, cards and mugs from the shop on the way out.  Arriving back at Lockeridge we were allowed to peep into a box which Sarah W had collected from the Royal School of Needlework.  She had just completed a course and we saw her gold work and silk shading.  Clever girl!

On behalf of everybody who went to Hampton Court I would like to thank Dr Kay-Williams and her colleagues who made us so welcome and to Ann Kingdon for organising the day which went like clockwork! 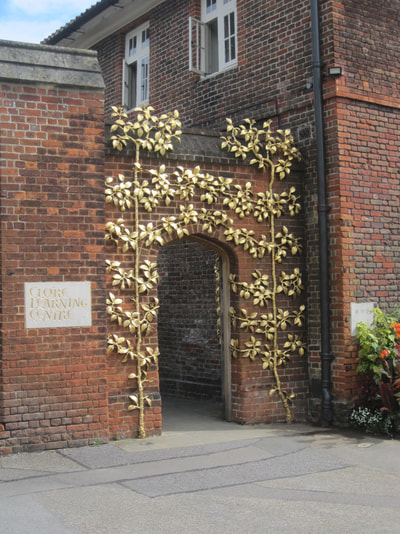 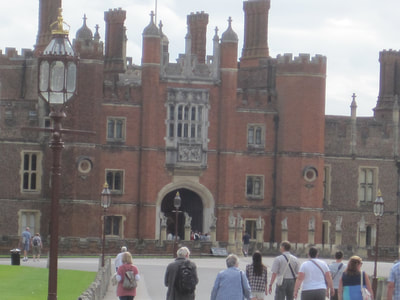 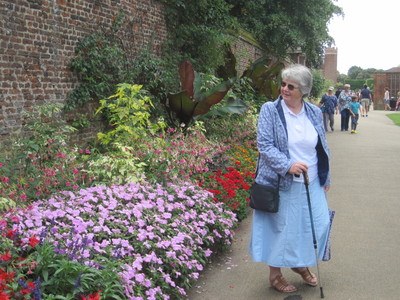 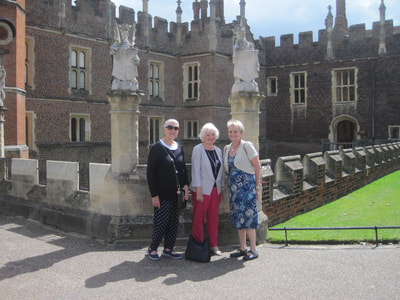 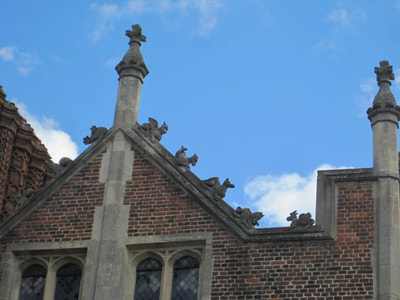 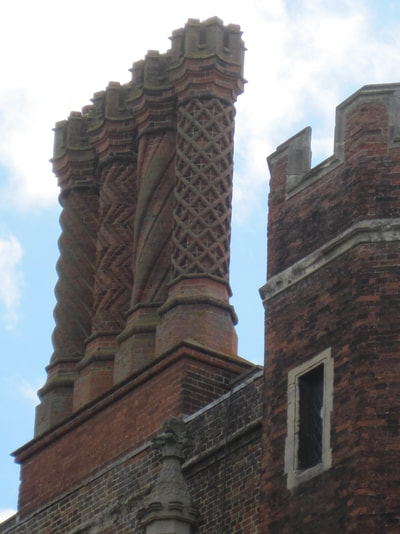 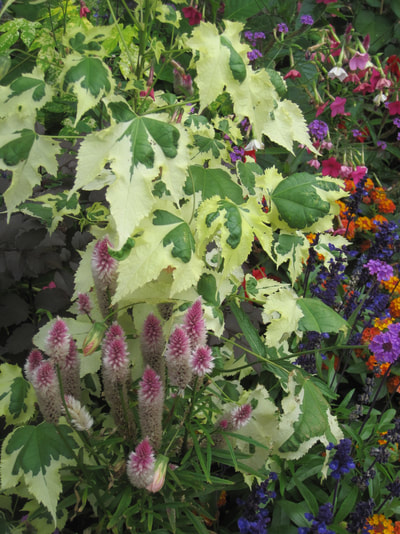 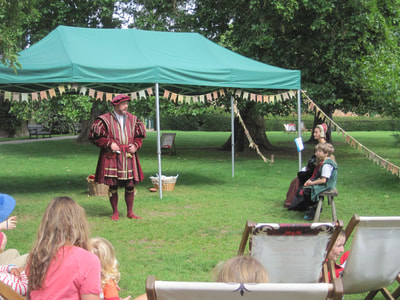 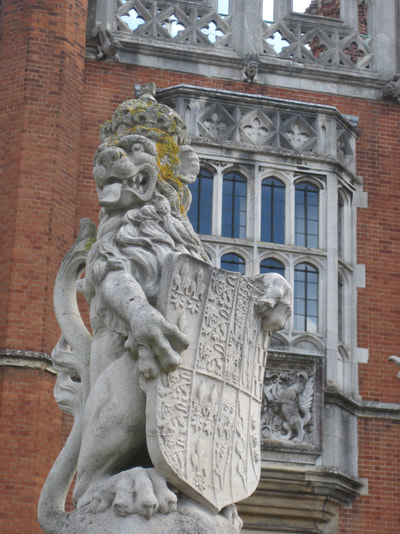