Louise Nichols was our tutor on Tuesday and she showed us how to cut lino and print our design on fabric.  It was the first time we had got together for a workshop for nearly 18 months and fortunately the weather was kind to us so we could have the back and front doors open and sit outside at lunchtime although we wore masks when walking around the hal

Louise introduced the day by explaining the various steps she planned, talked about inspiration and the options open to us.  In her work Louise mixes lino printing with applique and stitch and suggested we might like to do the same which is why the images of members’ work do not show a completed project as we didn’t have time to add any stitch.

After we had chosen our design, done a sketch, drawn it onto tracing paper and then transferred it onto the lino Louise talked about the various tools and inks.  The hall was incredibly quiet as everyone beavered away to create their block.

The fun part came after lunch when Louise showed us how to prepare the inks and add them to the roller before printing them onto fabric.

What a great day and to think we took away a selection of prints together with the block so we can use it again in the future.

Thank you Louise – I learnt a lot!

We welcomed M A Katritzky, Senior Research Fellow in the Faculty of Arts & Social Sciences at The Open University, as the first speaker for our new group., Textiles & Stitch Around Marlborough.

Dr M A Katritzky set the scene by introducing us to these two talented ladies, their difficult relationship, how they had learnt their skills and how they had established a collection of 16C embroideries and textiles which are now over 600 years old.

Today these embroideries and textiles can be seen at Hardwick Hall, Derbyshire, Oxburgh Hall, Norfolk, the Victoria & Albert Museum and the Royal Collection at Holyrood House in Edinburgh.

Dr M A Katrizky talked in detail about the five 12ft high hangings depicting Virtuous women to be found at Hardwick Hall.

Virtuous women, 5 large-scale appliqué hangings:
Penelope between Patience and Perseverance
Zenobia between Magnanimity and Prudence,
Artemisia between Constancy and Piety
*Cleopatra between Fortitude and Justice (*LOST)
Lucretia between Generosity and Chastity

Details and image of Lucretia hanging can be seen on the National Trust website: http://www.nationaltrustcollections.org.uk/object/1129593.2

These hangings were patchworked from old velvet and silk ecclesiastical and court vestments and it is known that Bess always had at least one embroiderer on her payroll. There were also a large number of non-religious embroideries.

At Oxburgh Hall three composite hangings can be found, the Marian, the Cavendish and the Shrewsbury. There is a wide selection of animals, birds, insects and an ape placed on a bench holding a mirror.

During her talk Dr M A Katritzky asked us to consider if thoughts had been expressed through textiles, why the specific women had been chosen for the Virtuous women hangings and if Mary and Bess’ relationships had had any influence on their work.

We are very grateful to Dr M A Katritzky for sharing her in depth knowledge of Elizabethan embroideries and hangings with us and for helping to get our new group off to an exciting start.

Michael Bath, Emblems for a Queen, the Needlework of Mary Queen of Scots. London 2008.

Santina Levy, The Embroideries of Hardwick Hall, a catalogue. London 2007.

Due to copyright I have not been able to show any of the images M A Katritzky shared with us in her talk but hopefully you will use the links provided.

The images above are from Wikipedia

Everyone was very excited to meet up for the first time in 18 months   What wonderful weather so we were able to have all the doors open and enjoy each other’s company.  After the speaker I took a few photos which have now been circulated in a Press Release to announce the new group. 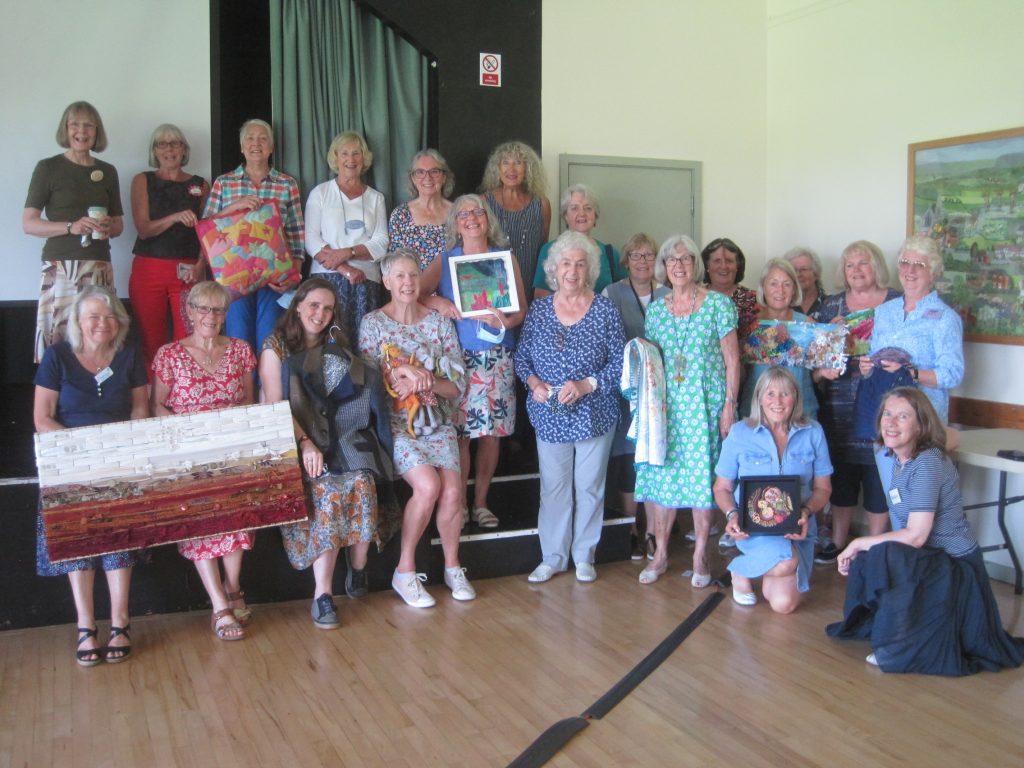 Members were asked to bring along a piece of work which they had done during lockdown and these photos were all included in the Press Release.

Clare has decided to stand down from the Committee and her position of joint Chair with Ann.  We are all extremely grateful for everything you have done for the group especially in this last year when you have been deeply involved with the setting up of the new group.  What would we have done without you when it came to researching GPDR and all those other challenging topics?  We will miss you but will look forward to seeing you at meetings and seeing all the wonderful projects you are planning.  I understand that you are now going to be in charge of the tea rota so watch out everyone , you have been warned! 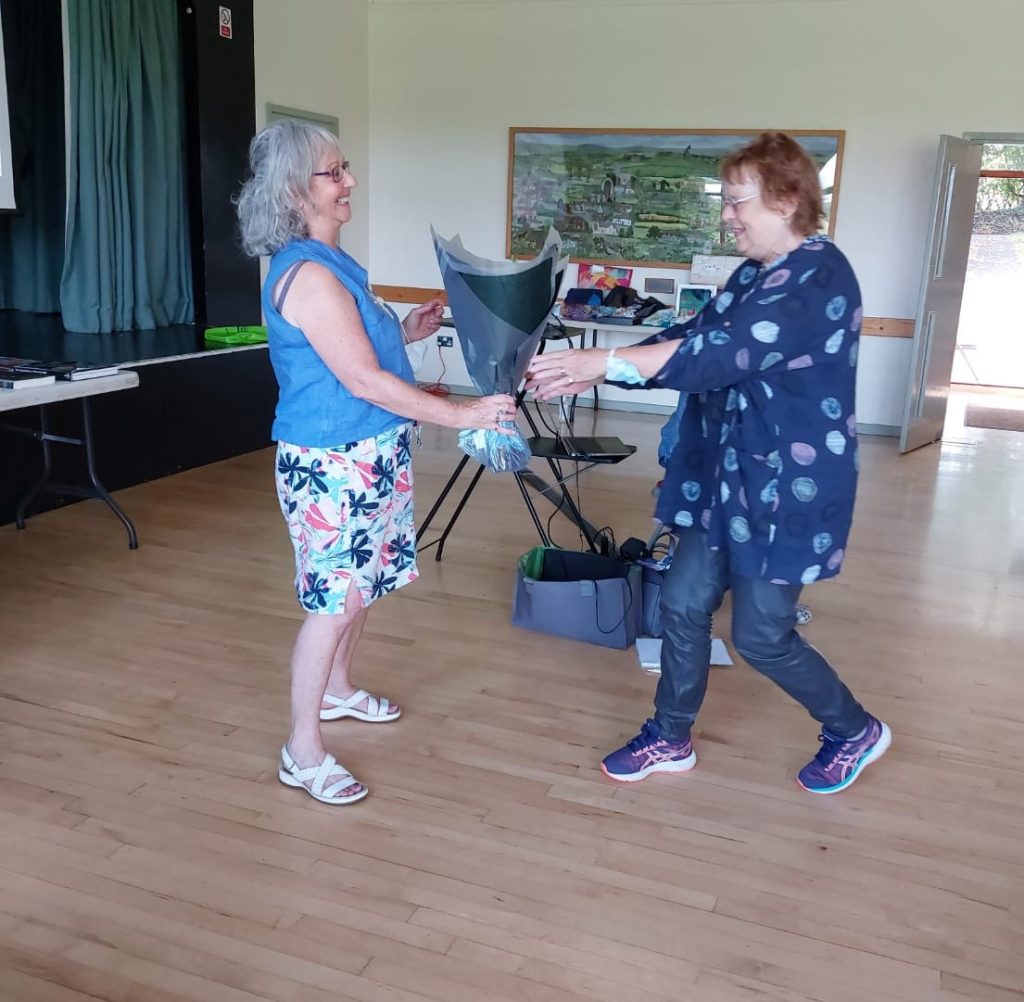 Report and photos by Ros and Lindsay