People came from far and wide and it was great to chat to like minded people about the joy of stitch.  I must say it was a privilege to speak to Jan Messent whose work I have always admired and really exciting that she should come to our event.

A very big thank you to Ann S and her team for their hard work organising the weekend and to members who helped support the event by demonstrating, making cakes, taking the money, stewarding and of course to those who entered their work.

Report and photo  by Ros
​ 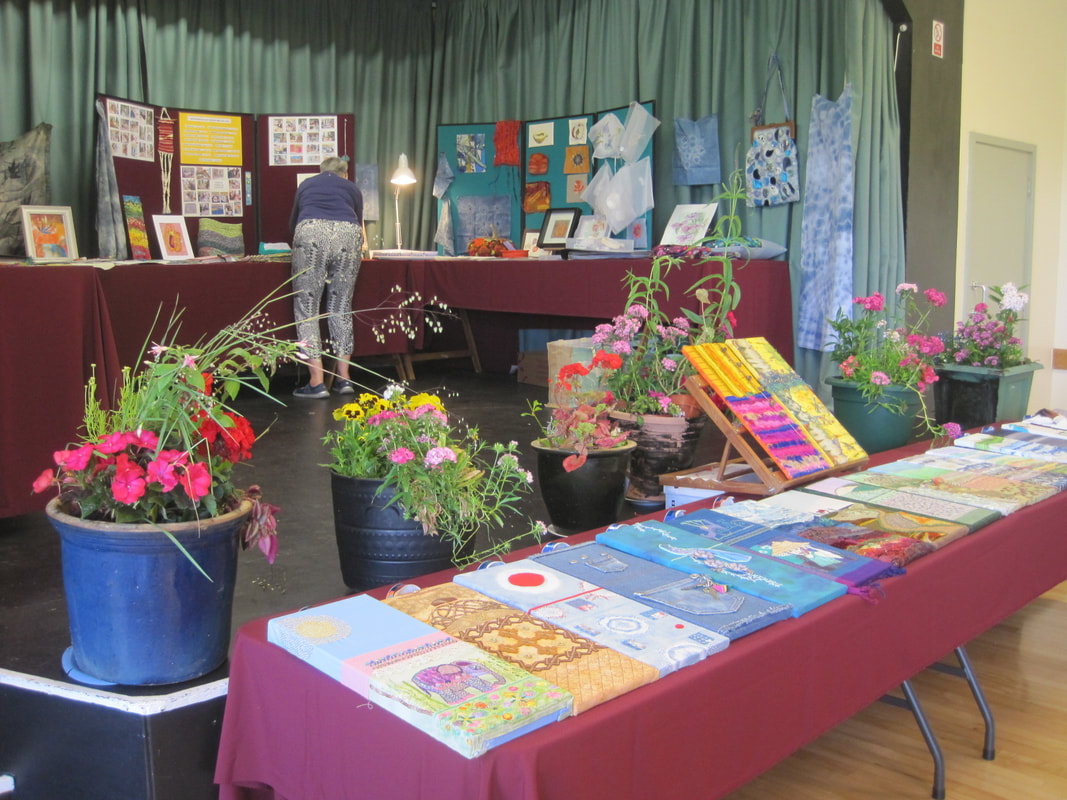 ​Christine Chester’s talk this month was entitled “Afterwards”.  Born and brought up in Eastbourne her father was an “in shore” fisherman and so beaches and the sea played a great part in her life.  Her grandmother and mother both taught her various crafts but it was not until she was 25 and wanted to give up smoking that she turned to these skills to give herself something to focus on.  Christine did her City & Guilds and following the horrific storm in 1987, she created “the Old Sea Wall”. 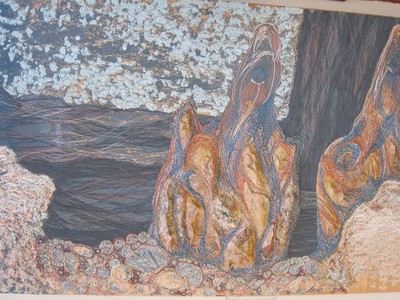 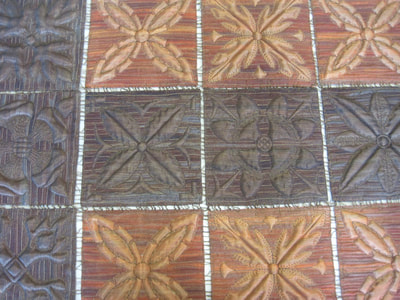 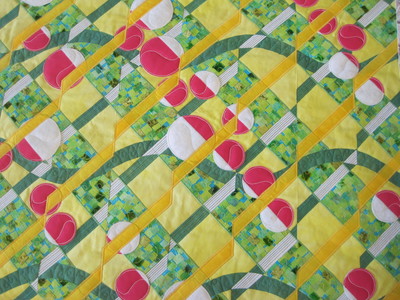 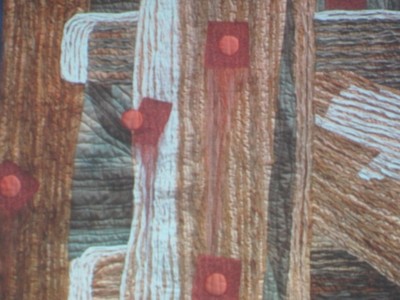 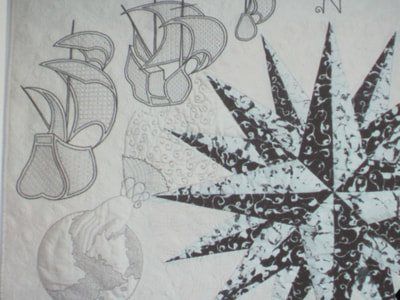 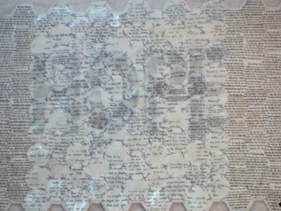 ​A lot of Christine’s work has been influenced by family events and in 2004, after her step son’s car accident she created “Faint Hope” which showed the harsh words of the consultants together with the words of hope sent in cards from friends and family.
​Christine felt she was become a butterfly with her work flitting from one thing to another so while at Committed to Cloth she decided to concentrate for one year on one technique.  About this time her father had a stroke, his memory deteriorated and he could not read.  This event in Christine’s life has given the foundation for various pieces of work – Fragile Fragments and Layers of Memory which won a prize at the Festival of Quilts.  She used a selection of photographs which her mother had taken of her father as  a fisherman and used various techniques to distort them to show the fading, gaps and deterioration in his memory. 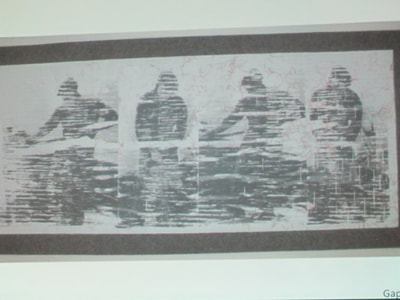 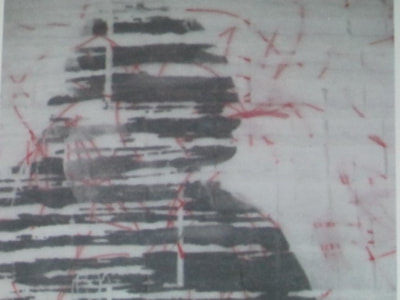 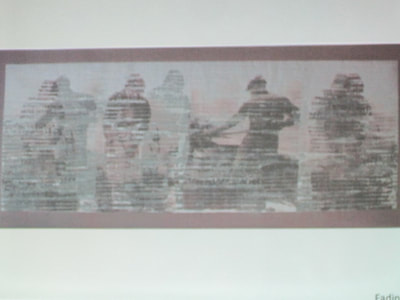 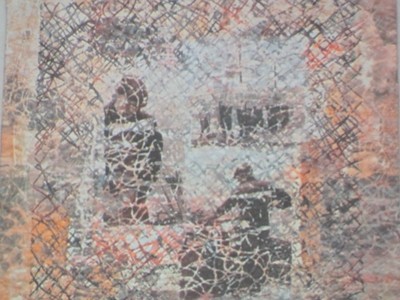 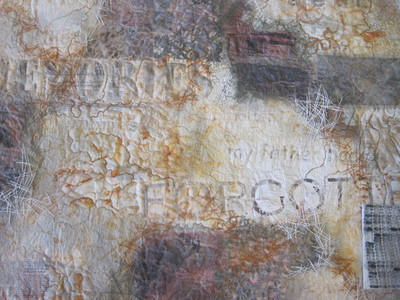 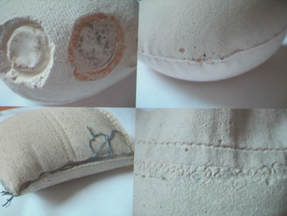 ​Realising how precious life is, Christine decided to give up her job, set up her own studio and start a Masters degree at the University of Brighton.  The final piece was based on empty pockets showing the emptiness of the brain.  Pockets were cast with plaster and she pointed out the fluff and crumbs which has accumulated at the bottom of the pocket had been transferred to the cast. 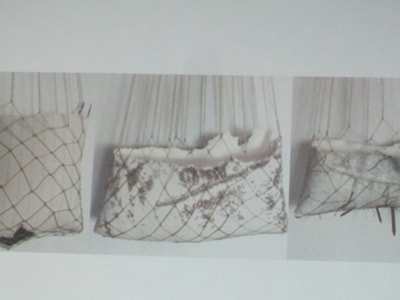 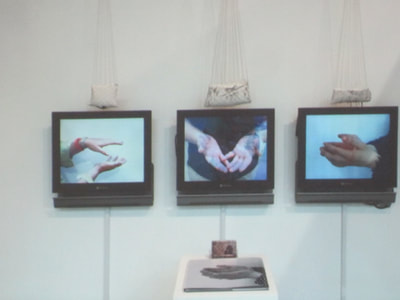 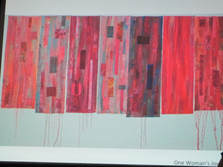 In 2014 Christine created “One Woman’s Journey”.  She explained that the amount of work in each panel was determined by how she felt at that point in her life – panel 4 had no stitch at all.
​
Christine is a founder member of UnFold which is a group of artists who had a successful stand at the Knitting and Stitching Show.

Two members of our Guild, Eileen J and Fiona H have made hearts for SSAFA charity exhibitions around the country to mark the centenary of Armistice Day 2018.

The first space used will be in The Young Gallery in Salisbury in June this year. 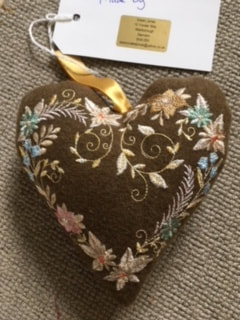 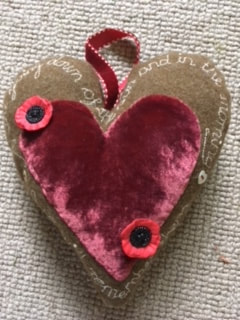 ​Report and photos by Clare R