Skip to content
Home > 2020 > February
Our February speaker was Dr Susan Kay Williams, Chief Executive of the Royal School of Needlework, who kindly returned to Lockeridge to give the second part of a talk about colour which she started in July 2018.

This talk Susan entitled Poo, Poison, Science and Serendipity and I am sure I was not the only one to be intrigued by what was to come.   She is a great collector of fabric and thread sample books and we found it fascinating to see how her research over the years has shown the development of both natural and synthetic dyes.  I never realised that guano was collected and used to make a yellow dye and that green, which was made with arsenic, became very popular in the early 1800s.  This material put the weaver, the maker and the wearer at risk and we were shown a sketch published in 1861 by Punch which was entitled the Arsenic Waltz.
​
Credit – A skeleton gentleman at a ball asks a skeleton lady to dance; representing the effect of arsenical dyes and pigments in clothing and accessories. Wood engraving, 1862. Credit: Wellcome Collection. CC BY 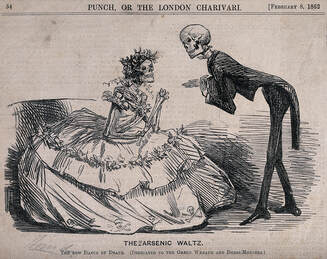 In the early 19C Michel Chevreul, a French Scientist, did research into colour. Initially his colour wheel showed 72 colours but he went on to explore an even wider range of hues ranging from loud to soft. A chemist, William Perkin, was attempting to find synthetics quinine. He did not find that but discover the first synthetic colour, later named mauve. This colour became a favourite of both Queen Victoria and Empress Eugene.
​Credit: Image below taken from: https://en.wikipedia.org/wiki/Michel_Eug%C3%A8ne_Chevreul 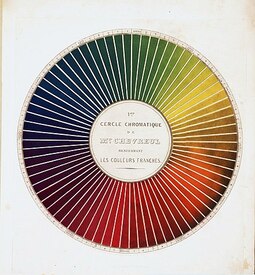 ​​Susan concluded her talk by bringing us up to date by talking about the invention of procion dyes and the production of synthetic indigo for making denim. She showed us colourful images of dresses from the catwalks of Mary Quant to those worn by Diana Ross and interior designers like Sonia Delaunay.
​Credit: Image below taken from Dr Susan Kay Williams’ presentation 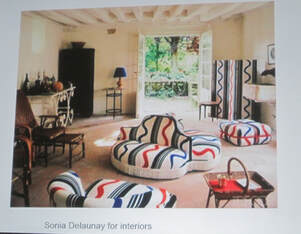