Skip to content
Home > 2018 > May
As I love hand stitching I was particularly looking forward to this workshop with Kathleen.

She started by showing us work from four different textile artists who used hand stitching.  One was well known to us, Emily Jo Gibbs but the other three were new names – Magdalena Godowa, Kimika Hara and Natasza Niedziolka.  Below you will see details of their websites. 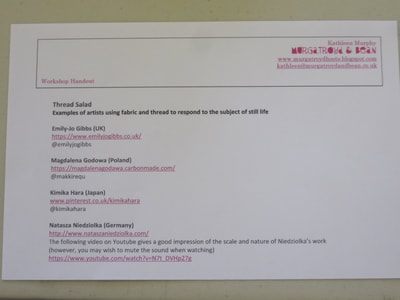 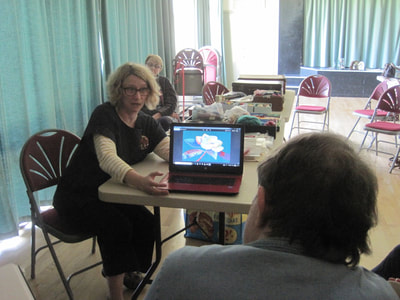 Before us on the table Kathleen had displayed various fruit and vegetables which she had cut open to show their insides and we were asked to choose one.  The challenge was then to replicate the fruit either adding appliqued materials or just hand stitch.  Below you will see the amazing results. 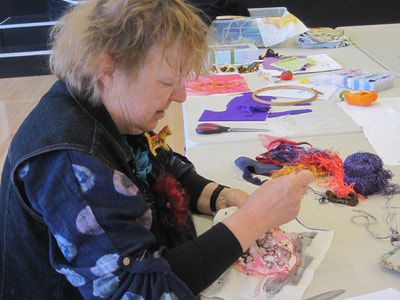 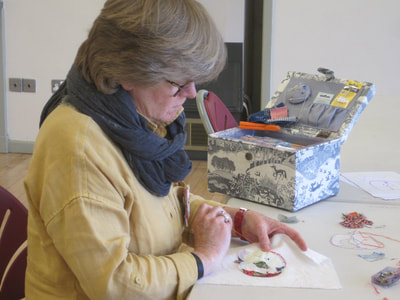 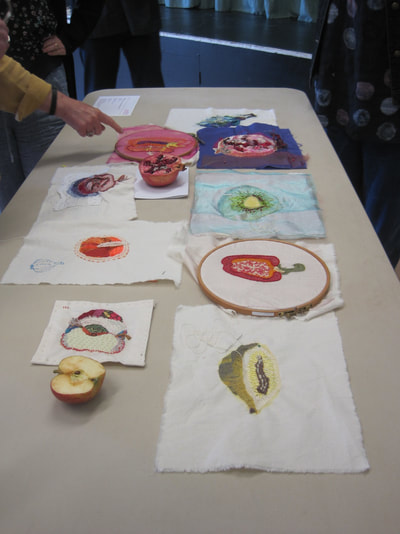 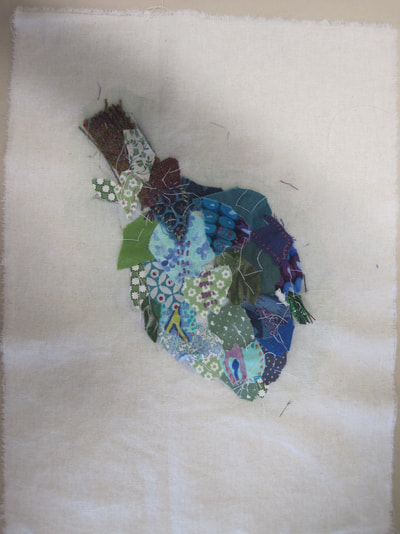 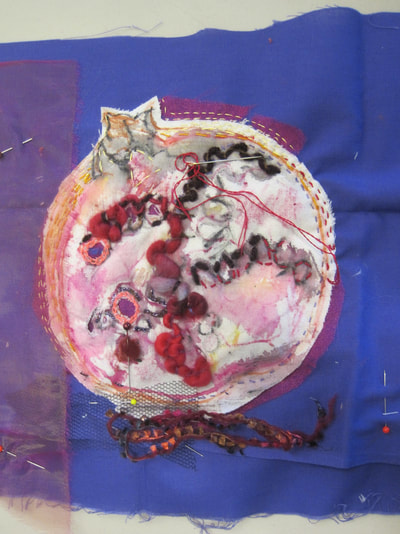 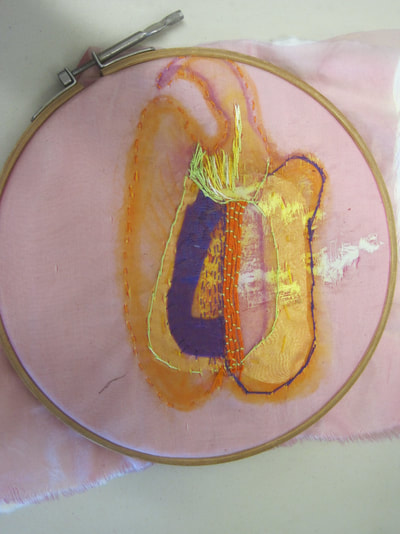 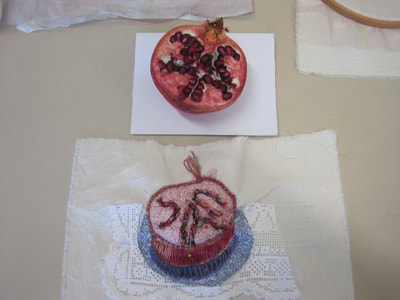 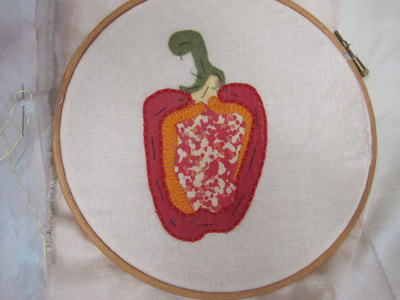 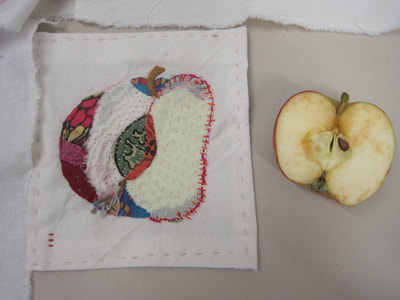 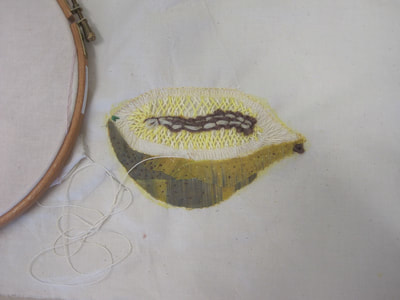 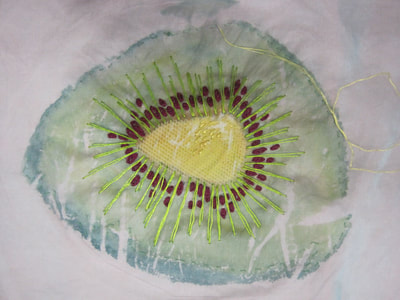 Kathleen has another interesting sideline which she told us about briefly at the end of the day.  She makes truly amazing little people under the name of Murgatroyd & Bean.  I know my grandchildren would adore to hear the tales and to see these people so I do hope she publishes the stories one day. 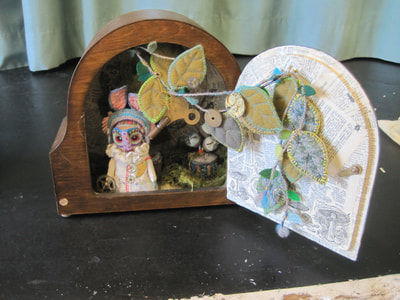 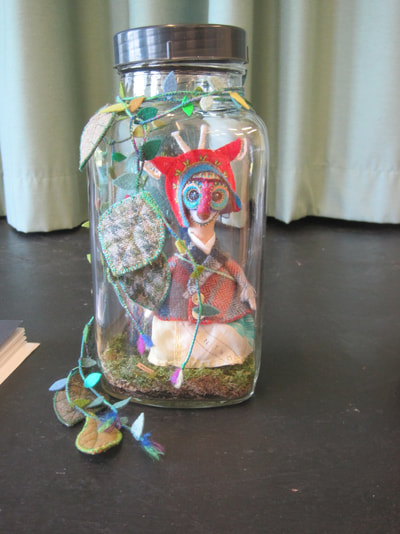 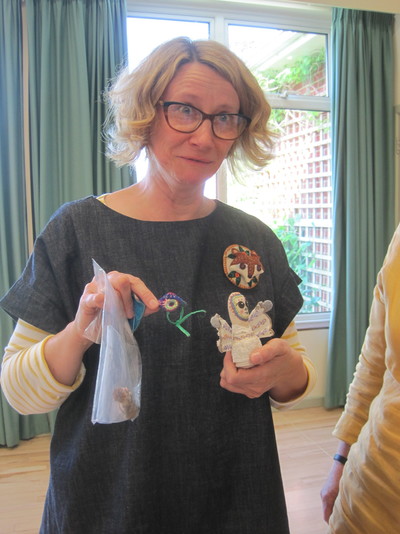 Thank you to Kathleen and her friend for a most enjoyable day.

I was curious about the title of today’s talk “Butterflies and Banners” so it was interesting to hear the story.  Born in Derbyshire Heather Everitt spent a lot of her young years with her grandmother who taught her numerous practical skills.  Heather was very lucky because she had inspirational teachers at Secondary School, during her Art Foundation course and later at Manchester Metropolitan University where she followed a BA Hon Textile/Fashion chief study in Embroidery.  Anne Morrell and Isabel Dibden Wright were two of her tutors and she was given the opportunity to explore behind the scenes of the Whitworth Art Gallery and Gallery of Costume at Platts Field.  Heather became interested in heirlooms and tried to age her fabrics to make them look old and worn.
​
A fortuitous meeting at the final exhibition of her course opened an interesting door which over thirty years later is still a major part of Heather’s work.  A gentleman asked if she would be interested in making a masonic banner and she makes on average 6 to 7 a year.  Heather also makes replica banners and conserves old worn ones. 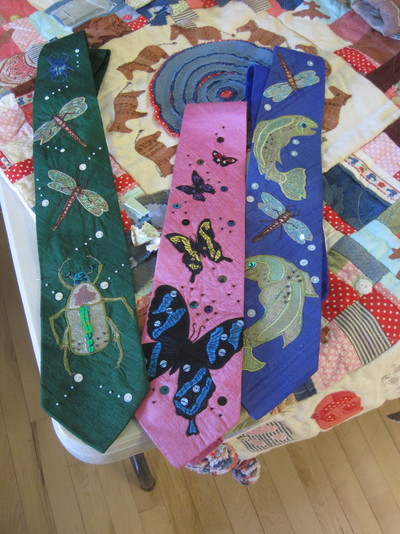 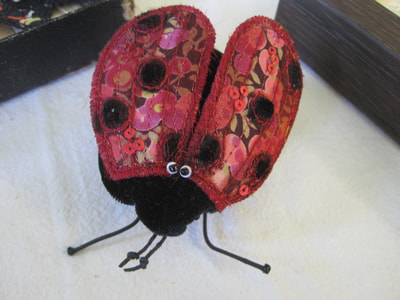 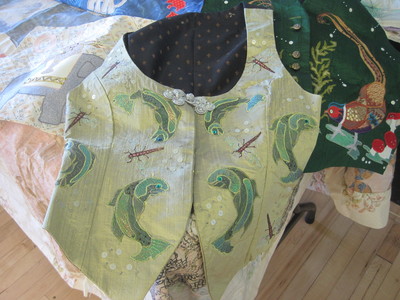 After university Heather tried to make a living designing and making hats and cushions but soon realised that she needed more lucrative employment.  She became an articled Primary School teacher on the outskirts of Manchester and later moved to become an Arts Co-ordinator in Devon.
​
Eventually, after 17 years full time she was encouraged by her husband to reduce her teaching and eventually give up work and concentrate on textiles.  She got commissions for waistcoats and ties concentrating on nature for inspiration – fish, butterflies, moths etc.  Heather used a lot of Liberty fabrics in her work and told us how one day six years ago she queued along with lots of other people to have the opportunity to show her work to a buyer at Liberty’s in Regent Street.  She was not successful on this occasion but went away fired with enthusiasm as she subsequently got commissions for weddings and other occasions.  More recently she was exhibiting at a craft fair in Devon and a visitor said she knew someone at Liberty’s and promised to contact them.  As of last year Heather’s amazing butterflies are now on display in the Liberty Home department. 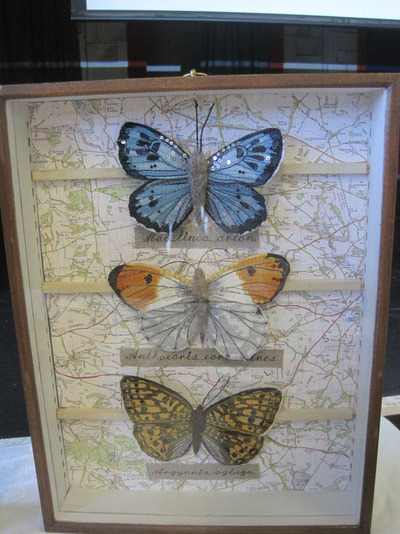 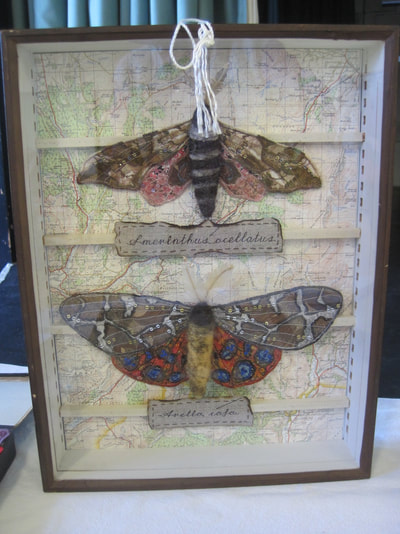 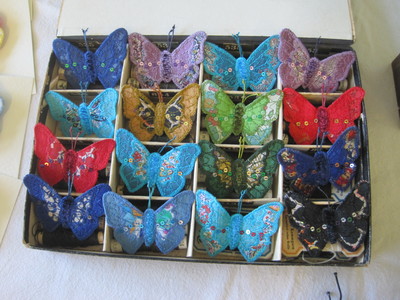 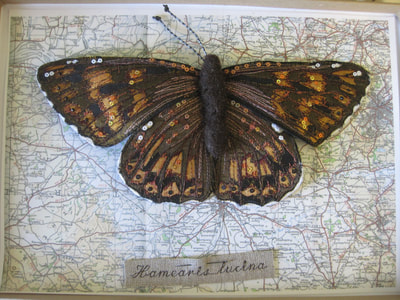 Heather then went on to explain how she draws or paints the butterfly, chooses the Liberty fabrics which she layers up under organza.  The various areas are cut back according to her design using a technique know as reverse applique.  The thorax of the butterfly is made using wet and needle felting.  Finally Heather adds some “bling” to her work in the form of sequins or the like.  The finished butterfly is presented in a labelled box with an OS map as a background identifying the area where it is found.
​
Heather is very pro-active with a Facebook page, a newsletter, an Etsy site and also sells through “madebyhandonline.com”

Our congratulations to Nikki on this wonderful achievement.  At our meeting on Monday she brought along this amazing glass bowl to show everybody.  She told me she has already started thinking about next year’s challenge so watch this space! 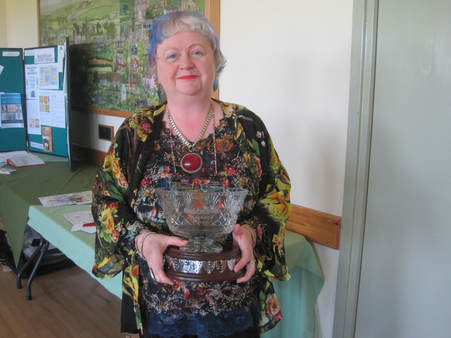 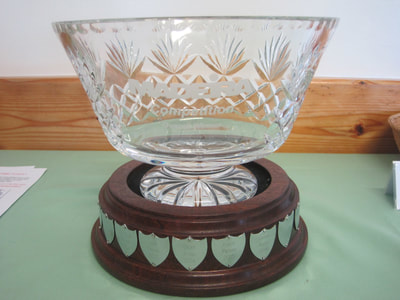 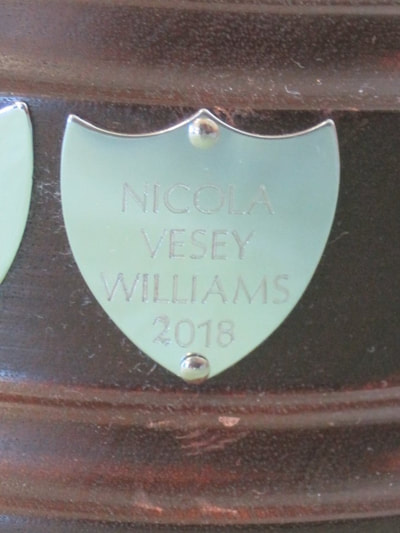 Congratulations to Nikki for a well deserved result on her hugely imaginative and creative piece of work. Nikki was judged overall winner by Madeira and Husquvana representatives as well as by Pat Tempest from the Embroiderers’ Guild, who plans to write an article on Nikki in Contact magazine. Her photograph will also be in the next issue of Stitch. Well done, Nikki!
Her prizes, which comprise a Sapphire 930 Husquvana sewing machine, a chest of Madeira Threads and the ‘Crystal Rose Bowl’ trophy, were presented by the UK CEO of Madeira Karen Burrows. Although ever hopeful, Nikki was completely overwhelmed by the result and is still finding it hard to believe. She says that her inspiration was stimulated by the iconic film and figure of Mary Poppins from her childhood days and the seemingly bottomless carpet bag and its contents presented a 3D challenge! The bag, took 10 months to complete. Nikki bought a vintage brief case in a charity shop and reworked it using recycled fabrics from the Wiltshire scrapstore by embroidering  various images from the film. Integral to her work, particularly in the making of the contents, was the technique of needlefelting and the recycling of household items such as foil wrappers, ring-pulls, a champagne cage, a knitting needle, and many more. Nikki’s background includes a one year art foundation course followed by a degree in graphic design. She subsequently worked in advertising for 15 years before changing direction. Between 1997 and 2001 Nikki completed C&G  courses in both embroidery and in needlefelting to such a high degree that her work was exhibited at the V&A Museum for 6 months!
​When asked if she has a style, Nikki was hard to pin down as she says that she never makes the same thing twice, though her passion is free machining, mixed media and 3D, with recycling at the core of her work. She draws her inspiration from nature and history, and from famous artists such as Klimt, Turner and the Pre-Raphaelites. Most days she spends at least 4 hours in her purpose-made studio designing, creating and stitching on one of her 8 operational sewing machines or on one of her two embellishers. Nikki is also a collector of Victorian machines, of which she currently has 10 on display. There is no holding her back now that she has tasted success. She tells me that she has already started working on next year’s Madeira sponsored competition!