Skip to content
Home > 2017 > June
Nicola Jarvis’ talk was entitled “May Morris, her father’s daughter”.  I think I can safely say that William Morris was well known to everybody in the room but I do wonder how many people knew all about his daughter, what an important designer she was, what an important book she wrote about stitch and design and how she became a key member of William’s business.

Nicola first became interested in May Morris in 2013 when she won a competition to exhibit her own embroidery inspired by William and May Morris at the William Morris Gallery in Walthamstow after it’s refurbishment.  In her research Nicola discovered that May was the younger of two daughters.  Her elder sister, Jenny had epilepsy and May helped to look after her.  As a young girl, May lived in the Red House in Bexleyheath and the Morris and Burne-Jones families were great friends.

William Morris wallpaper – Trellis.   Hanging by May Morris 1895.  Kelmscott House, Hammersmith
In 1896 the family moved to Kelmscott House in Hammersmith by the side of the River Thames.  At this stage in his career William Morris was making hand knotted carpets and May watched and became enthusiastic about the design.  At the age of 19 May decided she wanted to go to art school and enrolled for the National Art Training School – now the V & A.  As a student she had to study and draw objects and many of her drawings are in the Ashmoleum Museum in Oxford.  In 1893 she wrote the manual to instruct design called “Decorative needlework” which is still relevant today.
Examples of May’s drawings and sketchbook in the Ashmoleum Museum, Oxford.
​https://www.ashmoleanprints.com/search/artist/505567/may-morris-1862-1938/page/1/view/4
Nicola continued her talk by showing us many images of May’s work which had a distinctive symmetrical style all of its own but what I found interesting was that she used very few types of stitch and some were worked without a frame.  The main ones were the darning, stem and satin stitches.  After three years at art school May returned to the family business and became manageress dealing with the orders and enquiries in addition to designing and working the embroideries.  William Morris designed the first embroidery kit which was worked by May. 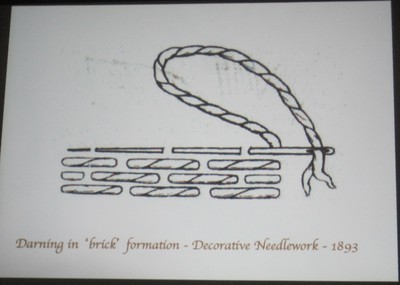 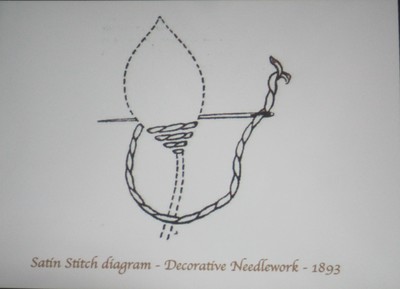 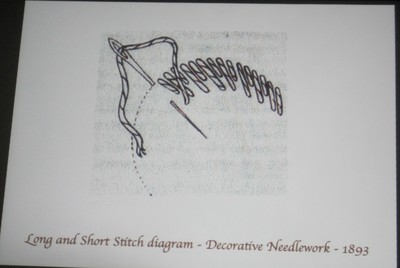 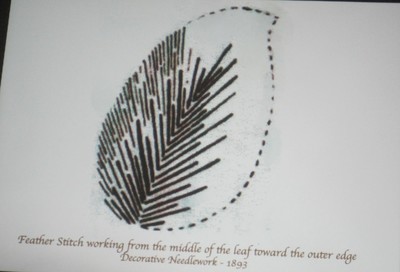 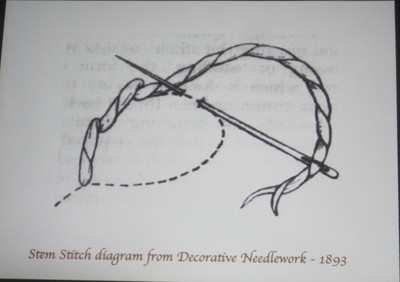 Examples of stitches used by May in her embroidery.  Darning, satin, long and short and stem stitch.
Being brought up in such a creative family it is easy to see how May Morris was influenced by her father’s work but in the Victorian times women’s education was not of great importance  and it was therefore very interesting to learn how May progressed to be such an amazing artist, designer, embroiderer and business woman.
More information  about May and images can be found on the V & A Blog.
​https://www.vam.ac.uk/blog/caring-for-our-collections/unsung-artists-may-morris-1862-1938 ​Also the National Museums of Scotland: https://www.nms.ac.uk/explore-our-collections/stories/art-and-design/may-morris-embroideries/ 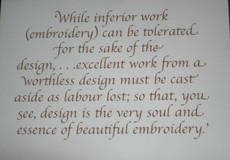 A comment taken from May Morris’ book “Decorative Needlework”  and one which we can all reflect on!