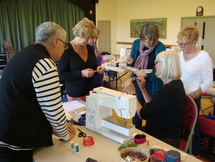 Eight of us enjoyed this month’s workshop with Caroline Marriott.  It was a lovely relaxing and stress free day.  At times the concentration was so intense you could have heard a pin drop!

Caroline began by talking us through the process to make our bangle to fit correctly for each individual and how to cover Pelmet/Craft Vilene with our chosen fabric, making two exact layers.  When this was completed, Caroline demonstrated various ways to decorate the bangle with pieces of fabric, ribbon, beads and machine embroidery. 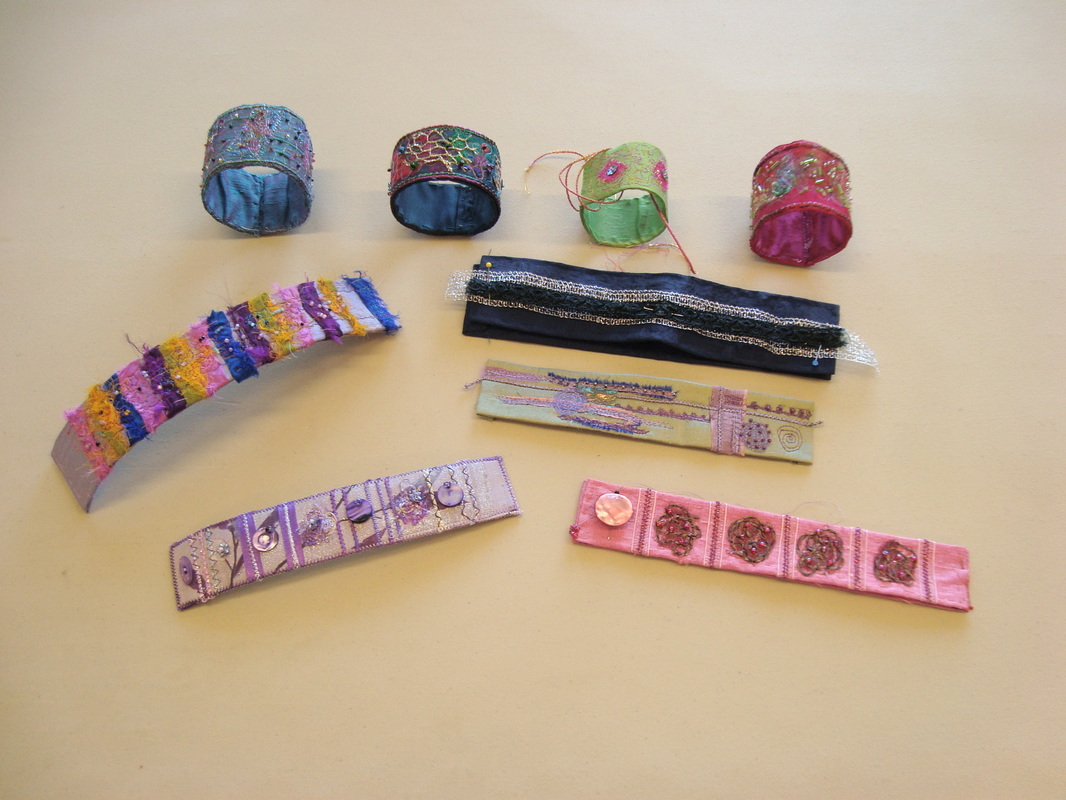 Over lunch the chat turned to some of our other hobbies, then in the afternoon we completed our bangles and Caroline explained how we could use the techniques we’d learnt to make other items, such as brooches, belts, etc.  As she had brought examples of her work we were suitably inspired to go ahead and possibly make some Christmas gifts.

Members will be able to see our work at the next meeting.

Report by Celia B Thank you Celia, Ros 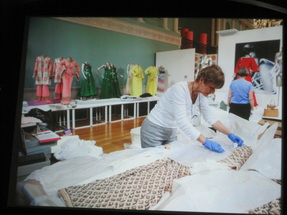 The speaker after our AGM this month was textile conservator, Alison Lister.  Alison runs a private company, Textile Conservation Ltd,  based in Bristol.  She explained that most conservators hold an undergraduate or post graduate qualification and now the only place with such a course is Glasgow University – previously it was available at Winchester and Alison trained at Hampton Court.  Her work is mainly within the heritage sector and her aim is to preserve items for the future not to make as new.  She does a lot of conservation work for the National Trust, local and regional museums and privately run stately homes in the South West area of Great Britain and this can either be on site or in her studios, depending on the item to be restored.  Nowadays she is often asked to work in front of the public where there is always a lot of interest.  Alison mentioned working at Longleat House, Tyntesfield, Corsham Court, Coventry Cathedral, Dunster Castle, Westonbirt, Bristol Museum and the Museum of Somerset but a lot of her every day work is done for private people.
At one end of the spectrum Alison showed us the photo of a silk shirt thought to have been worn by King Charles I at his execution and owned by the Longleat Estate and then an early 20th Century Scout jumper which had been handed down in a private family.  She told us that as a conservator she approaches both items in exactly the same way. 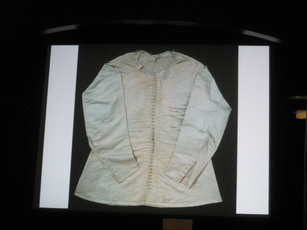 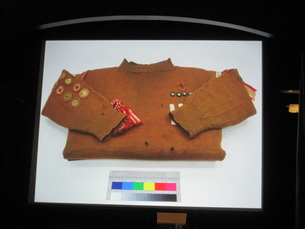 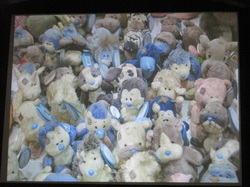 With her team of four she starts by classifying the item concerned – dating it, who owned it, what it is made of, what is wrong etc.  They then report back giving recommendations for restoration and a quote.  Often the conservators work alongside others who specialise in other materials, eg metal, wood, paper or ceramics.  They also work with salvage companies and restore items which have been damaged by smoke or water.  She made us all laugh by showing a collection of 72 Blue Noses which had been damaged in a fire – once they were all washed they looked like the originals. In talking about the causes of damage Alison said it has been noticed that with global warming we are not experiencing cold winters when insects and larvae would be killed off so there has been an increase in insect damage.
Another interesting part of her work is to draw up an exhibition check list.  Alison gave the example of visiting the Fashion Museum to view and record outfits worn by the Supremes which were due to go on display.  At the end of the exhibition she had to return to make sure no damage had been done.
Alison then went on to explain some of the techniques used, dyeing fabrics to insert when the original had been destroyed, cleaning the dust with light vacuum suction, gently washing if possible, mounting items between net so the back and front are visible.  The conservation work is done through new fabrics eg linen for tapestries, so it can be identified in the future and possibly removed or restored again.  Below is a selection of items Alison showed us: – banners, flags, Coventry Cathedral tapestry designed by Graham Sutherland, an embroidery by Mrs Delany 1770-1788, The Country Wife (work of the WI) and several on site images 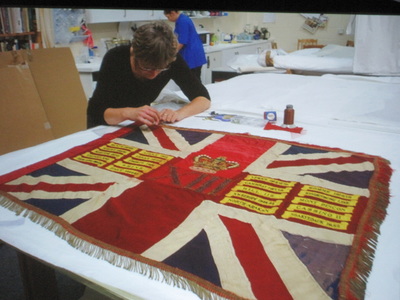 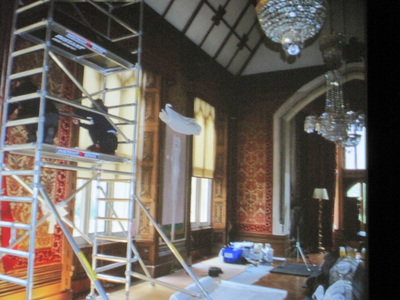 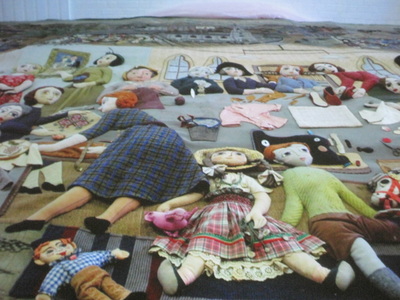 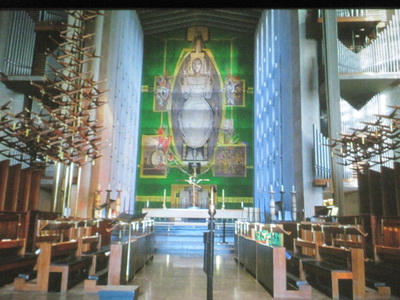 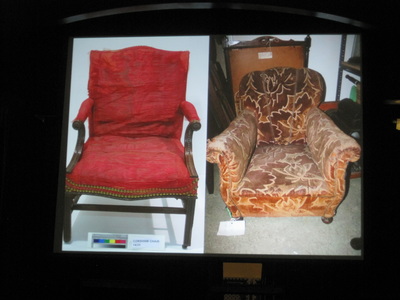 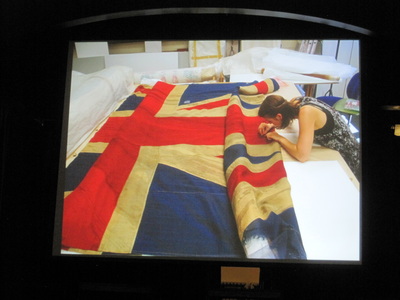 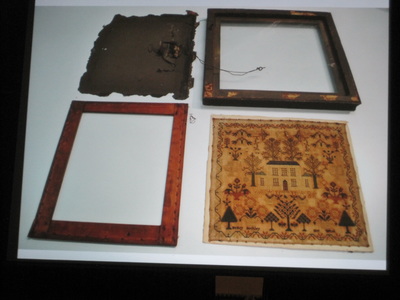 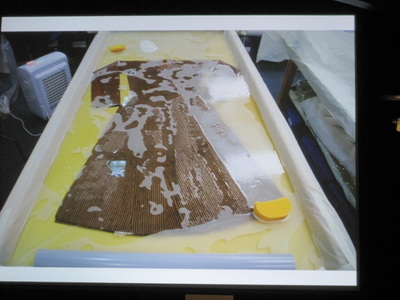 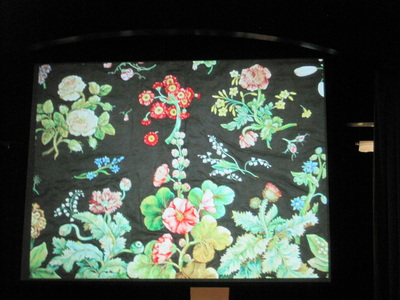 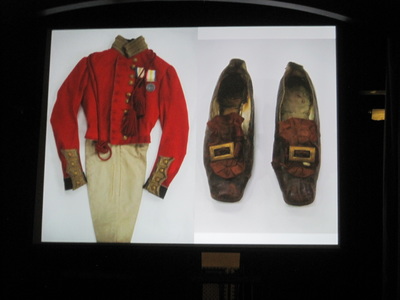 I would like to thank Alison for her fascinating talk – it was a shame we did not have more time for questions but perhaps we can visit your studios one day or see you at work on site. Report by Ros

At our AGM on Monday Yvonne Miles stood down as Chairman after 7 years prior to that she was Secretary and speaker finder, making a total of 11 years.

Shirley Watson also stood down as Secretary after 9 years and was on the Committee a few years before that.

We thank both Yvonne and Shirley for all that they have done for the Guild – they will be greatly missed but we hope they will continue to enjoy all our activities from the side lines. 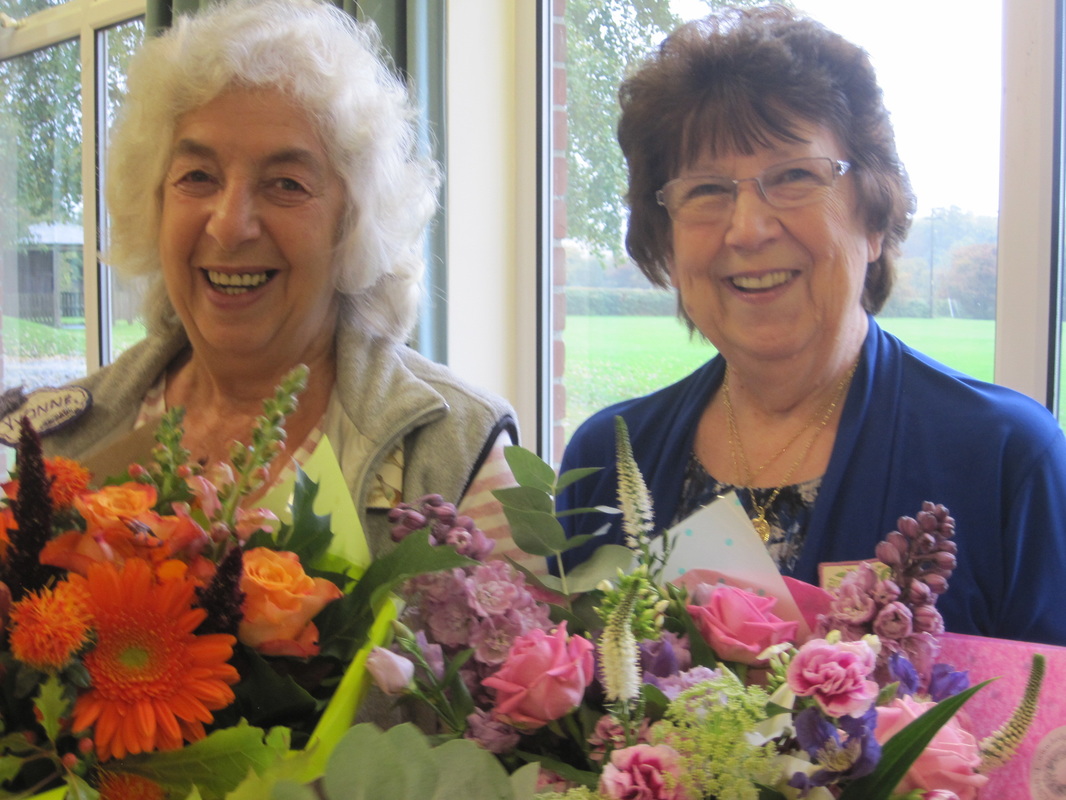 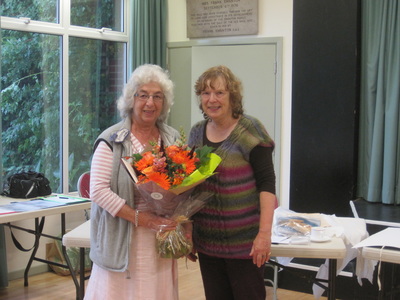 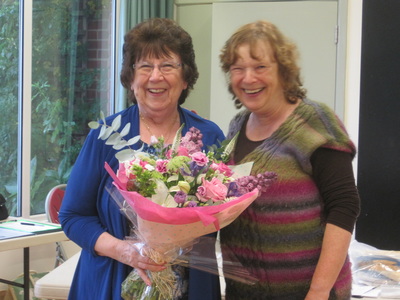 Susanne Stedman has kindly agreed to be Branch Secretary but unfortunately the position of permanent Chairman is still to be confirmed.  For the meantime members of the Committee will take it in turn to cover this role for three month at a time with Clare Russell starting the new arrangement.